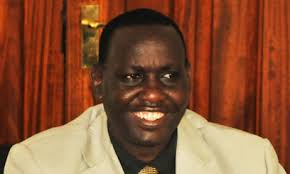 William Kibet Kiprono was recently, as published here within the hour of the information coming form State House Nairobi, appointed Director, Kenya Wildlife Service, in October 2012. He was a County Commissioner, Vihiga County prior to this high profile appointment.

Kiprono has served in the public service as an administrator for over 22 years. During his career he has worked and served in Kajiado, Baringo, Nyandarua, Kiambu, Kisumu, Makueni, Marsabit, Mwingi, Samburu, Busia, Tharaka Nithi and recently Vihiga County. He was first appointed as a District Officer in 1990 before rising through ranks to his appointment as a County Commissioner in May 2012.

This experience prepared him, to take up the role of the CEO of a government agency that has both uniformed and non-uniformed members of staff. His appointment as Executive Director, Kenya Wildlife Service is a culmination of his public service in Kenya. He is in fact the first ever career public servant to join KWS as a Executive Director.

His decision to accept the appointment as the director was informed by the belief that he can take up the challenge of addressing human wildlife conflict, poaching and winning more space for wildlife. He foresees natural resource based-conflicts happening in the future if nothing is done to address wanton destruction of the environment by the current generation. He has set out to address these challenges through enhancing law enforcement, providing conservation education and awareness and lobbying for relevant legislations that solidly anchor conservation agenda. He plans to build synergies with all stakeholders for sustainable wildlife management in the country in his first 100 days as the director.

A St. Patrick (Iten) Alumnus, Kiprono has attended several other trainings in management and strategic leadership at Kenya School of Government. He has undertaken paramilitary training for administration officers as well as anti-terrorism and disaster response training in Israel. A strong believer in constitutionalism and teamwork, he intends to give KWS a human face that upholds the supremacy of the people of Kenya as enshrined in the constitution. In his own words he values integrity and patriotism.

Best of luck to William in what is without doubt the greatest professional challenge in his life.

Like Loading...
PrevPreviousUN in Kenya tells staff not to travel to Mombasa or coastal region
NextMarburg fever outbreak suspected in South Western UgandaNext

Have you ever been to WTM London?