SUDAN AVIATION RECORD GETS ANOTHER BLOW WITH F50 CRASH IN AWEIL 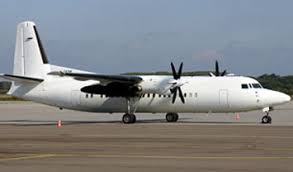 (Picture of a F50 – courtesy of Wikipedia)

A Kenya registered Fokker 50, used for flights inside Sudan by the International Organization for Migration IOM, crashed yesterday late afternoon while attempting to land in Aweil / South Sudan, coming from the Sudanese capital of Khartoum with a full passenger load of Southern Sudanese due for repatriation. According to information now finally verified, the aircraft belongs to a Kenyan registered airline, Skyward International Aviation and is registered with the Kenya Civil Aviation Authority as 5Y-CAN. The company according to a source at Nairobi’s Wilson airport has two F50 on their books, the other one being out on lease and registered as 5Y-BYE

From available details, sketchy as they are right now, it is only known that all passengers and crew apparently survived the crash although the plane sustained serious damage to hull, undercarriage and engines.

One of the reportedly 57 on board was seriously injured but it could not be verified if crew or passenger.

The aircraft in question according to aviation data at hand is nearly 23 years old and first entered service in 1990. No details at all could be obtained from on site nor from Juba or Khartoum over the possible causes of the accident and even the weather information was unavailable at the time of rushing this report as breaking news to press.