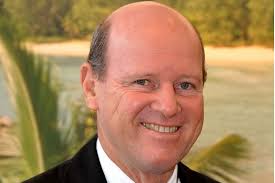 The meeting, uniquely held on both sides of the magnificent Victoria Falls, will bring renewed focus to African tourism, which according to available statistics only received some 53 million visitors last year, compared to well over a billion travellers worldwide. This constitutes a meager 5 percent of global tourism movements, something Alain St. Ange is intent to change.

Back home in the Seychelles he has kicked loose the most persistent marketing juggernaut the archipelago has ever seen, since he was first appointed Director of Tourism Marketing, was then promoted to take over a reinvigorated and reinvented Seychelles Tourism Board before being appointed Minister for Tourism and Culture last year in March.

The Seychelles have been in the media spotlight since soon after his arrival on the board, and his many friends across Africa are keen to see him bring this exact expertise to the UNWTO Executive Council where he would carry the torch of hope, turning into a beacon of hope, to market Africa like he marketed the Seychelles and double the continent’s arrival number within the next few years.

Alain St. Ange understood the role a positively inclined media can play and created media alliances spanning the entire globe, with the Seychelles getting the spotlight way beyond what an island destination, even with 115 islands to speak of, with 220.000+ visitors in 2012 would ordinarily command. His passion for his home islands undoubtedly will translate into the same passion to get Africa into the spotlight, should he be elected, something many of his friends in Africa want to see happen.

His twin centre holiday deals with African mainland destinations, promoting both safaris as well as posh beach vacations on Mahe, Praslin, La Digue and the other islands across the extent of the Indian Ocean, also brought him many admirers on the continent, who appreciate how he is keyed to promoting not just his home islands but destinations well beyond their own shores. The Vanilla Island cooperation of Indian Ocean islands from as far as La Reunion over Mauritius, Madagascar, Mayotte, Comoros and the Seychelles of course show that Alain St. Ange looks well beyond his own horizon, a rare quality among professionals and more so politicians, a quality normally reserved for visionaries who are set to shake the status quo up.

Watch this space to learn all about the UNWTO General Assembly in Livingstone and Victoria Falls and the outcome of the Executive Council elections.