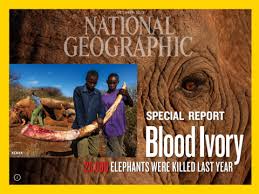 The largest seizure of blood ivory since 2010 took place yesterday at Hong Kong harbour, when 1.148 tusks were discovered in a container shipped from Togo. Customs officials in Hong Kong confirmed the find. No arrests have been reported at this stage but the international task force, comprising among others CITES personnel and Interpol investigators, are now reportedly working with the Hong Kong authorities to establish the origin of the ivory through forensic tests and DNA analysis. The haul is estimated to have a street value of around 2.3 million US Dollars, and while dealing a financial blow to the illicit underground smuggling network still points to the death of nearly 600 elephant, slaughtered for their tusks.

This latest discovery of a container stuffed with blood ivory, hidden under other cargo and wrapped to evade detection, has caused outrage once again among the global conservation fraternity. CITES is facing calls for a complete overhaul for failing to introduce effective measures to curtail trade, legal and illegal, of ivory and other endangered species trophies but the main direction of the wrath again goes towards China’s government, more often and more loudly than ever before being accused to be an accomplice to the trade for sitting on their hands and using equally draconian measures towards ivory smugglers as they employ at home against Panda poachers.

Poaching a Panda, one of China’s primary flagship animals in the wild, attracts the death penalty when found guilty in a court of law and conservation groups from around the world have for long called to raise blood ivory smuggling, processing and possession to the same level.

While complete tusks are often transformed into intricate artful carvings, then displayed in the homes of the rich and mighty in China wishing to gain social stature by such possessions, tusks are equally often used to make such ordinary things as chop sticks or carved seal stamps, while Africa’s elephant populations are decimated for such fallacies and the ever growing greed and hunger for ivory products.

In recent weeks were several shipments of blood ivory also caught in Mombasa, suggesting a growing flow of the contraband cargo through underground smuggling rings out of the continent, and after giving customs and wildlife authorities the slip in Mombasa or Dar es Salaam then shipped via the Gulf, Singapore and Malaysia to their final destination, most of the time in China but also in Vietnam and other Far Eastern countries.

Wildlife activists like Dr. Paula Kahumbu in Nairobi have raised their voices around the world to bring attention and the spotlight of global attention to this growing problem, which, if it is not stopped soon, may well eliminate the last great herds of elephant roaming the African wilderness and as a result deprive the range countries of much needed tourist dollars. ‘Our governments are hopeless. They are quick to throw their entire security apparatus against their political opposition, but when it comes to such crucial issues as crack down on poaching, they can lie into your face about lacking resources and yet there are always cars, manpower, allowances and fuel when they hunt political opponents. China has a death penalty for poaching Pandas. In East Africa poachers get off the hook for a few thousand bob and smugglers caught at Jomo Kenyatta International are let go for a fine of a few hundred dollars. Poaching is an economic crime, it is sabotaging our tourism industry which in Tanzania, Uganda and Kenya is a key cornerstone of the economies. We are sick and tired to hear about weak legislation. Our parliaments have it in their power to change those laws. They can introduce fines worth 100.000 US Dollars or more, prison terms of 15 or 20 or more years, they can even introduce capital punishment to deter financiers and traders from facilitating poachers. Unless we see action now, it may be too late. Parliament in Dodoma has a report, which is undisputed, that last year they lost some 10.000 elephant to poaching. Others say it is a lot worse than that. Our governments should stop stonewalling and protecting well connected individuals often linked to the regimes and start acting. Arrest, prosecute, confiscate their houses and properties and throw the key away after locking them in the cells. That is what we need, talking talking talking is not achieving anything’ ranted a regular contributor from Nairobi after the news broke yesterday late afternoon of this latest seizure of blood ivory.

Fact remains, that both the African governments of the elephant range countries and the countries most notorious for importing blood ivory must stand together and devise ways and means to combat poaching and tackle demand in the consumer markets. Only in unison can a solution be found. Watch this space.

# Aviation – Are sustainability and growth compatible in air travel today?