(Dr. Taleb Rifai with the Zambian Minister for Tourism & Arts Charles Banda at the
launch of the Pamodzi Carnival in Lusaka yesterday morning)

It was a triumphant return by the UNWTO Secretary General to Zambia, where he presided over the second World First he brought to this Southern African nation.
During his 2013 visit he presided over the first ever UNWTO General Assembly held in two cities and two countries – Livingstone in Zambia and Victoria Falls in Zimbabwe just across the mighty Victoria Falls of the Zambezi River.
This year’s visit market the launch of the first ever ‘International Sustainable Park for Tourism Development‘ when he made the formal declaration in South Luangwa National Park near the town of Mfuwe.

The UNWTO Conference for Promoting Sustainable Tourism as a Tool for Inclusive Growth and Community Engagement in fact ended with the Lusaka Declaration, details of which are now available here https://atcnews.org/2017/11/17/learn-more-about-the-lusakadeclaration/
and later on via the UNWTO website www.unwto.org

It was no doubt the last time this correspondent had the opportunity to interact with Dr. Taleb Rifai in an acquaintance which goes back for many years. It provided a chance to exchange some private words which in essence reflect what I am going to say here now:

Dr. Rifai, who got elected after a bit of a battle with a South Korean candidate for the post of Secretary General of UNWTO in 2009, like no other before him brought relevance to the organization. Since taking office on the 01st of January 2010 he took UNWTO from the Madrid headquarters to the member states and had a particular affinity to Africa. This our continent he supported from the first day of his first term of office right until the last moments of his leadership, when he once again visited Zambia before winding down his term of office in December.
Against many odds did Dr. Taleb succeed in turning the focus of the international tourism fraternity to the African continent and faithfully stood by us when we faced one of the greatest challenges this past decade, the Ebola outbreak in West Africa.
I was privileged to have known Dr. Taleb personally and had the opportunity to interact with him one on one several times over the past years. Now it is the time for me, and for the entire African tourism fraternity, to say thank you very much – Danke Schoen, Thank You Very Much, Webare Nyo Nyo Nyo and Asante Mingi Sana – to Dr. Taleb for his extraordinary commitment, dedication if not outright zeal and wish him and his wife Nisrine a well deserved retirement. 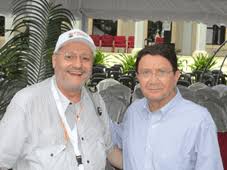 (Once upon a time together at the Seychelles Carnival)

Also see some links to other articles written over the years about Dr. Rifai:
https://atcnews.org/2017/03/02/attacking-dr-rifais-unwto-legacy-only-the-latest-faux-pas-in-a-campaign-losing-its-lustre/