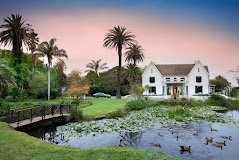 Fancourt Estate’s award-winning luxury boutique hotel, The Manor House, will become a member of the prestigious Leading Hotels of the World (LHW) collection of globally renowned luxury hotels, as of 01st of April 2019.

The Manor House is a national monument, set in the beautiful gardens and rolling landscapes of the sprawling Fancourt estate in the heart of South Africa’s Garden Route. It is the former home of the estate’s founder and namesake – Henry Fancourt White – and since its refurbishment and development as a luxury boutique hotel has won global acclaim, being recognised for its achievements along the way. Among other awards, it was named South Africa’s Leading Country House Hotel in 2018 by the World Travel Awards.

LHW was established in 1928 by a small group of influential and pioneering European hoteliers. Today, it has its headquarters in New York City in the US and offices in more than 20 major cities across the world. Its ethos is based on the belief that the experiences we have when travelling help to shape the way we view the world and that the discoveries we make along the way develop knowledge and wisdom.

“With its rich history and abiding character, we believe The Manor House to be a perfect fit with the Leading Hotels of the World ethos,” says Fancourt Director of Sales and Marketing, Peter Dros. “We are therefore delighted that The Manor House can now proudly display the LHW logo having met all of the exacting standards the group requires to be accepted as a member,” he added.

Requirements for LHW membership state that a hotel must display excellence in all areas affecting guest comfort, convenience and well-being. Only the most eminent hotels are accepted which reinforces the incredibly high standards on offer to guests at The Manor House. The detailed point system used by LHW was developed by Leading Quality Assurance – a company that conducts anonymous property inspections for the world’s most prestigious hospitality organisations. It covers all phases of the guest experience, from reservation to check-out, assessing all aspects of a guest’s stay.

“LHW consistently evaluates its members to ensure compliance with its meticulous criteria, ensuring that the expectations of today’s sophisticated global traveller are met. We are incredibly proud that The Manor House meets all of these criteria and has attained this globally recognised benchmark in terms of quality and service,” concluded Dros.

Fancourt will also celebrate its silver jubilee this year, turning 25 years, a quarter of a century of service excellence and becoming Africa’s ‘Mecca of Golf‘.