70 MILLION EURO LOSS IN QUARTER ONE ATTRIBUTED TO CORONA FALLOUT

As a result of the Corona crisis, Brussels Airlines reports an adjusted EBIT of EUR -70 million for the first quarter, only a 9% decrease compared to the same period last year, which included January and February 2020, two “normal” months before the Coronavirus reached Europe. The first quarter is traditionally the lowest performing one of the year in the aviation industry. The Belgian airline’s revenue fell by 76% year-on-year to EUR 55 million, while operating costs were brought down by 59% to EUR 130 million, in part due to lower production, but also thanks to cost-saving measures in its Reboot Plus program.

Between January and March this year, Brussels Airlines welcomed only 192,000 passengers, a drop of 88% compared to the first quarter of 2020, when two out of the three months were “normal” months without the impact of Covid-19.

The ban on non-essential travel issued by the Belgian government severely impacted both the Brussels Airlines’ medium-haul- and long-haul passenger numbers. The intercontinental traffic however performed better than the European operations due to the company’s focus on African routes with a stable demand in the VFR segment (Visiting Friends & Relatives) and at the level of cargo, especially in terms of medical supply transport.

Brussels Airlines’ revenue fell by 76% year-on-year to EUR 55 million in the first quarter of 2021 as a result of the Corona crisis, while operating revenue was 76% lower year-on-year at EUR 60 million.

Operating expenses decreased by 59% to EUR 130 million primarily due to the volume-related drop in material expenses. Despite a large proportion of fixed costs, cost reductions were made thanks to a near completion of the restructuring phase of the Reboot Plus program.

Within its Reboot Plus transformation program Brussels Airlines has almost completed the restructuring phase which reduces the fleet size by 30% and staff numbers by 25%. Among other additional measures in this program, new collective labor agreements have been in force since January 2021 for all employee groups, generating a competitive cost structure at the level of the personnel costs. The Reboot Plus program, targeting a structural 8% EBIT margin by 2024, now enters a second phase, a phase of strategic investment in customer servicing, in efficiency, employee development and in tools in order to create a long-term profitable future for the company.

Since the beginning of the Coronavirus crisis, Brussels Airlines has strictly adapted its flight capacity to respond as closely as possible to the market demand in order to safeguard its cash position. Thanks to this very proactive and restrictive capacity management, Brussels Airlines was able to maintain cash-positive flight operations every week since its restart on 15 June 2020.

Currently Brussels Airlines is gradually building up its flight capacity to be able to provide a flight offer in line with the expected demand for the summer holiday season (on average 65% of its 2019 capacity), with a focus on the leisure segment and of course its large African offer.

Flights to the Eastern African destinations of Entebbe, via Kigali or Bujumbura depending on traffic days, are expected to return to daily flights later in the year, as reported here by ATCNews last week. 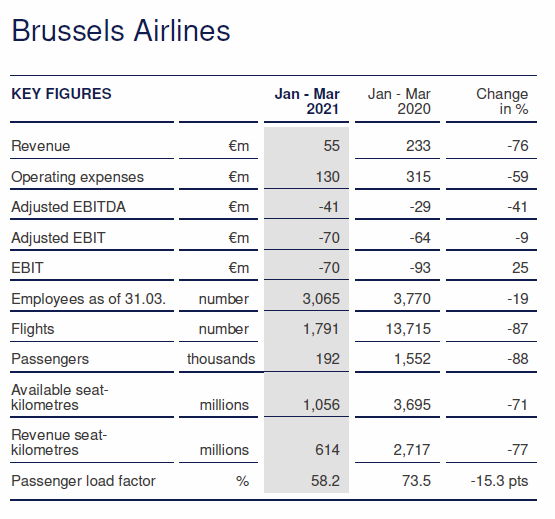 #Ugandans looking forward to the annual #Oktoberfest celebration in #Kampala