In what appears to be a highly significant gesture by RwandAir was the homecoming of the airline’s first Airbus A330-200 halted enroute for a stop in Entebbe, to showcase the aircraft to travel agents, corporate clients and the media.

This move might yet prove to be a masterstroke by the RwandAir management as the airline continues to court the Ugandan market which it presently serves with scheduled services between Kigali and Entebbe but notably also flights under fifth freedom rights between Entebbe and Juba and between Entebbe and Nairobi.

Many Ugandans, unconvinced that hundreds of millions of US Dollars should be spent on another airline start up when those funds can be put to better use, have adopted RwandAir as their quasi national airline. Increasingly do they fly via Kigali to a growing number of West African and Southern African destinations but also into the wider region and beyond to Dubai. In fact did Mr. Mirenge make it clear during the media briefing in Toulouse that the airline had the option to add further fifth freedom right destinations out of Entebbe and it is now anyone’s guess which additional routes RwandAir might plan to serve via Uganda’s international gateway. There is intense speculation already that, should RwandAir settle for London as their primary European destination, a scheduled flight could be routed via Entebbe both ways to provide nonstop services to the UK. 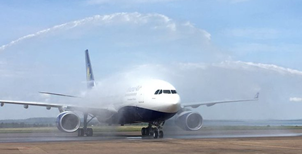 The much fanfared homecoming of the first widebody aircraft, fully owned by RwandAir, to Kigali was therefore slightly delayed to make a point to the Ugandan public that they can count not just on the continued presence of RwandAir but likely a stronger presence in the future, when the airline commences flights to initially Dubai with the new wide body before then adding Mumbai, Guangzhou and at a later stage Europe when the second A330, a dash 300 variant, has been delivered by end November.

Meanwhile was it party time in Kigali when the aircraft touched down and was received by the traditional water cannon shower before coming to a stop. Drumbeats awaited the disembarking team from RwandAir, led by CEO John Mirenge and his senior staff on board, accompanied by top managers from Airbus. Traditional dancers performed, delighting the waiting crowd and invited guests on board the maiden flight under Rwandan colours who had travelled to Toulouse to witness the handover of the aircraft. A second A330 will join ‘Ubumwe’ in November and is presently already undergoing cabin outfitting and painting as seen yesterday in Toulouse at the Airbus assembly works.

This marks a watershed development for RwandAir which only a few years ago was described by CEO John Mirenge as a ‘virtual airline’ before the acquisition of 6 brand new aircraft and the lease of two relatively young planes signalled the march into the African aviation history books. RwandAir, with the arguably youngest fleet on the continent, will by mid 2017 operate at least 12 aircraft, two Airbus A330’s, four Boeing B737-800’s, two Boeing B737-700’s, two Bombardier CRJ900NG’s and two Bombardier Q400NG’s.

The airline presently serves 6 destinations in West Africa, Brazzaville, Libreville, Douala, Cotonou, Lagos and Accra while Abidjan will be launched in just a few days.

In Southern Africa does RwandAir serve Johannesburg and Lusaka with Harare flights due to commence in January 2017.

Next year will new destinations like Khartoum and Durban but also Abuja be introduced while London, perhaps via Frankfurt, is the most likely European target for RwandAir given the comments made over the past few days by the airline’s CEO Mr. John Mirenge. 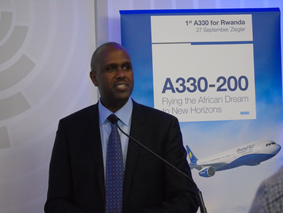 (RwandAir’s CEO Mr. John Mirenge addressing guests at the Kigali International Airport following the arrival of ‘Ubumwe‘, the first A330 registered in Eastern Africa and the first in Africa offering a separate Premium Economy Class)

In the wider Eastern African region does RwandAir fly to Entebbe, Juba, Nairobi, Mombasa, Kilimanjaro, Dar es Salaam and Bujumbura. Kamembe, the only domestic destination within Rwanda is served daily with a Q400NG and continues to be in high demand with travelers coming across the land border from the Congo.

Dubai too is served daily, three times a week via Mombasa, a service which is popular with travelers and will no doubt continue.