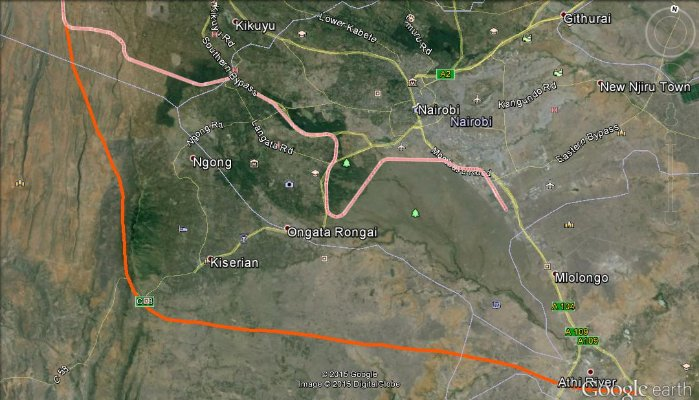 The application by the defendants, i.e. Kenya Railway Corporation / SGR, NEMA, KWS and various ministries to lift an injunction was rejected yesterday as the High Court in Nairobi upheld the petition of conservation groups to stop work on the planned route through the park which by common consensus is to avoid irreversible damage to the ecosystem.

A hearing has been set for later today, 05th of October while all eyes are now on the companies involved in the railway construction to see if they violate the court order and can be prosecuted for contempt of court, something the judiciary takes very seriously in Kenya.
Another case has also been filed at the East African Court of Justice and other legal forae in Africa.
Meanwhile have more residents of Nairobi yesterday held another peaceful protest march and sit-in together with several groups of environmental defenders, demanding the immediate halt of any railway construction affecting Nairobi National Park and its wildlife dispersal area.

The protesters are concerned that, if the SGR route crosses the national park, the railway will destroy the pristine ecosystem already in the short run.

Outspoken participants were also saying the National Park should essentially be protected by all means necessary and petitioned President Uhuru Kenyatta not to allow it to happen that the park would be touched. ‘Under the disguise of development, these shady and corrupted planners destroy our future‘ several young activists proclaimed.

Senior and seasoned wildlife defenders meanwhile accused the Kenya Wildlife Service (KWS) and in particular the organization’s chairman Dr. Richard Leakey to fail its mandate by not defending the national park and its unique wildlife from any harm.

Stout protesters later chained themselves at the gates of KWS headquarters at the entrance to the National Park.

Standing united and speaking with one voice the residents and the steadfast environmentalists officially had earlier delivered the following open letter to President Kenyatta and copied it also to KWS:

OPEN LETTER TO H.E. THE PRESIDENT OF KENYA

His Excellency Hon. President Uhuru Kenyatta,
President and Commander in Chief of the Armed Forces,
Republic of Kenya

This is a letter from concerned citizens of Kenya to you regarding a decision that will greatly impact the future of sustainable development in this country and the legacy that you leave as President of Kenya.

On 13th September 2016, Kenya Railways Corporation (KR) and the Kenya Wildlife Service (KWS) announced that they plan to build the second phase of the standard gauge railway (SGR) right through the middle of Nairobi National Park (NNP).

This decision has not involved all the impacted stakeholders (conservation groups and local community). It is important that there is a consultative process with all concerned before any such a decision is taken. The people’s right to be heard is paramount and entrenched in our laws. The final decision should be born from an inclusive, legal and respectful process.

Furthermore no feasibility studies have been availed by KR and KWS, despite numerous requests for these studies. This goes against Section 35 of the Constitution of Kenya, 2010 which mentions the right of all Kenyans to access information regarding such decisions affecting them. Having welcomed your words at the opening of the UNEA2 where you said, “The environment must not be an afterthought,” your commitment is clear that you would by no means let a national treasure be destroyed without a comprehensive, meaningful and inclusive ecological and social impact assessment by trained professionals in the field in consultation with the wealth of wildlife and environmental experts we have within Kenyan borders.

Section 42 of the Constitution protects the right of every person to a clean and healthy environment. No evidence has so far been provided to show that routing the SGR through the park will not endanger the ecological functioning and environmental health of NNP. NNP is a small national park (only 117 km2 ). It will not be able to bear the burden of having a large-scale infrastructure development like the SGR constructed right through it. The damage to the ecosystem will be one that we may never recover from.

4) NNP is a Unique Asset for Kenya

a) The NNP is the only true globally renowned wilderness area located within the administrative boundaries of a capital city.

b) NNP serves as a major natural air pollution control system for Nairobi.

d) NNP was also the stage of the largest ivory burn in history, which you Mr. President spearheaded.

NNP is our heritage. Allowing its destruction would be a betrayal to our forefathers and future generations. Our forefathers including our country’s first president, Hon. Mzee Jomo Kenyatta made a commitment to conserve this country’s exceptional natural ecosystems.

“The government of Kenya, fully realizing the value of its natural resources pledges itself to conserve them for posterity with all the means at its disposal” – Late Hon. Mzee Jomo Kenyatta.

The local Maasai community gave up their land for conservation. Article 44 (3) of the Wildlife Conservation and Management Act 2013 clearly states that ‘the land so donated or bequeathed shall not be used for any purpose other than the establishment of a wildlife conservation area as originally desired by the previous owner.” Allowing the SGR Phase 2A to go through NNP is a gross violation of this law and an insult to the bequest made by the Maasai community.

The reason given on what has prompted this decision is a need to avoid the apparently higher costs that an alternative more eco-friendly route might require. This cost saving attempt in comparison to the value of NNP is misleading. The park is priceless!

As President of Kenya, you have sworn to uphold Kenya’s strict environmental and wildlife laws and the constitution. Alternatives exist for the SGR. It can go well south of NNP directly to its westward destinations with a feeder route to Nairobi to transport any people and cargo. We can have the SGR and all its benefits as well as conserve the NNP and the entire natural and cultural heritage that it represents. We cannot simply opt for a cheaper option that works in the short term but has a long term cost that is unquantifiable and detrimental.

Tourism enhancement is among the major priorities under the economic pillar of Vision 2030. How will this objective be achieved if the country’s most iconic national park is destroyed? Nairobi National Park is visited by a more diverse number of international visitors than almost any other park in the country.

MR. PRESIDENT, THIS IS YOUR RESPONSIBILITY AS A LEADER

Mr. President, you personally now have the opportunity to decisively show Kenyans and the world what value you place on Kenya’s natural heritage and the goals of sustainable development by calling for the SGR to take the acceptable tradeoff of passing far south of NNP.

We beseech you Mr. President to lead us in protecting our heritage and our ecosystems. Do not sacrifice our future environmental health for the sake of development. Show the world that conservation and development can exist together!