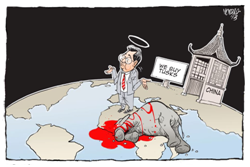 The tone is getting sharper and the message louder and clearer whom Kenya’s tourism industry who is who consider the main culprit in the growing wave of poaching incidents witnessed in recent months across Kenya. A demonstration organized by the Mombasa and Coast Tourist Association yesterday in Mombasa, befittingly kicking off under the famous tusks which span across Moi Avenue in the centre of the city, raised support and approval from across society at large as well as the political spectrum, where candidates for various elective offices – Kenya is having a general election on 04th March – voiced their support for demands to strengthen anti poaching measures.

‘Our government should listen to us, the people, when we tell them to name and shame China, Vietnam and others in Asia. Those are responsible for the slaughter of our prime tourism resource, our wildlife. Across Africa poaching is at an all time high for ivory and rhino horn. These countries are doing nothing to help us because they covertly tolerate the greed of their citizens for our ivory and rhino horn. China has many Kenyans on death row for drug offenses, crimes those fellow citizens of ours should not have committed. I am saying that smuggling, processing and possessing blood ivory is as bad an offense. Those responsible for wiping out our natural heritage too should meet such harsh measures. China may give us a lot of assistance and has helped to build infrastructure but there is a limit for us. Let me be candid, they siphon away Africa’s mineral resources at laughable prices because our politicians are corrupt. Now, wherever they are, wildlife is getting poached, stray dogs disappear and last week several Chinese were arrested in Naivasha for cooking a snake. My colleagues and I are clear, this has to stop or they should pack up and go home. We demand from our government that when Kenya goes to CITES they mince no words. They must expose the culprits and have their ivory trading licenses cancelled to make it impossible for them to even legally trade or import ivory. It is time to name and shame them, because if we do not, our wildlife will be gone just as fast as our mineral resources and oil and gas. If China cannot behave like a friend, I am sorry to say, they are our enemies, enemies of conservation, enemies of our wildlife and enemies of our tourism industry. We want their tourists to come and see our wildlife alive and go home and advocate for us. But we can no longer tolerate that their government metes out harshest sentences if one of their Pandas is poached inside China but allow tens of thousands of elephant and hundreds of rhinos slaughtered in Africa every year’ said a regular source from the Kenya coast, who on second thought then requested the comment to be treated without giving a name as was initially agreed.

It is understood that following the well organized campaign in Mombasa similar events are planned in Nairobi and other key towns benefitting from tourism across Kenya, to put more pressure on politicians to include anti poaching measures and tourism support in their agenda, should they win the forthcoming elections and form a government.

Another top tourism executive in an exchange of emails also made it clear where he would like to see the new government’s commitment vis a vis tourism and wildlife conservation when he wrote: ‘Maybe the first thing is for you to mention that as all eyes are on Kenya in the run-up to the election some stakeholders have expressed surprise that the importance of tourism, as an economic driver which creates jobs and livelihoods for Kenyans, has not been given any prominence by the Presidential aspirants who should be showing how they will encourage further growth of tourism. One candidate, William Ruto, did mention tourism, stating that his party would bring in 5 million tourists but gave no inkling into how this miracle would be achieved and presumably he has no idea that without a major re-development of the airports to bring them up to proper international standards (like Addis Ababa) and without incentives to attract major airlines into Kenya from new markets such as Singapore and Hong Kong or to encourage the existing airlines to increase their frequencies, the present flights into Kenya could not handle even half the suggested number. And even if they could, we do not have the hotel capacity to accommodate these numbers. Airlines will only increase their frequencies or add new flights to a destination if there is a big increase in demand. If Kenya intends to allow all its wildlife to be killed by poachers and to allow those behind the poaching to operate with impunity then we will no longer have the unique attraction that brings tourists here in the first place and demand will decrease!’.

In four weeks Kenya will have a new parliament elected and there will either be an outright winner of the presidential election of the country will have a run off a few weeks later. The time is therefore now to use the campaigns of the leading candidates for office to understand what is at stake for Kenya and what the all important tourism industry needs in terms of commitment, including a total commitment to treat the slaughter of wildlife just like homicides are treated. ‘As you so often wrote, the fines must cripple those who are involved in poaching, financing, trafficking. And like Uganda proposes, jail terms should start from 10 years for ‘ordinary’ poaching and go to life imprisonment for commercial poaching to take any incentive out of the game for those raping our natural heritage’ added another source.

A high level task force is being put together right now in Kenya to address all these issues and present the government with recommendations of how to act and respond to this crisis in an appropriate fashion, including resource allocation and where necessary a presidential directive to enforce immediate action outside the red tape government otherwise might face. Watch this space for more updates on this critical issue.