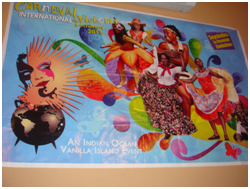 LA REUNION, ZIMBABWE, MADAGASCAR were the names called out when Alain St. Ange, Minister of Tourism and Culture, introduced the co- hosts of this year’s Carnaval de Carnivals, the Carnival International de Victoria, bringing together 3 or the initial 6 Vanilla Islands in the Seychellois capital, alongside twin centre holiday partner Zimbabwe, which took the leap to join the ranks of the carnivalists this year in an official co-hosting capacity after attending the previous editions as participants.

‘President Michel, this has become the biggest tourism event in only 3 years and we thank you for your support’ said the Minister for Tourism and Culture in his opening remarks before adding ‘… and we hope that next year more of the Vanilla Islands and more partners from Africa will join the only carnival show which has gone truly global, our Carnaval de Carnivals here in the Seychelles’. He also thanked the Seychelles tourism and business community for their ‘standing 100 percent behind the event’ before recognizing Emirates as the official festival airline, which with 12 flights a week from Dubai connects the archipelago like no other airline with the world.

And after officially declaring the festival open, the show truly went on the road, ably conducted by the two MC’s, with musical interludes of top performers from the Seychelles and La Reunion separating the group performances which saw the Seychelles, La Reunion, South Korea, Bali / Indonesia and Goa / India and Zimbabwe getting the capacity crowd at the Seychelles International Conference Centre to its feet. 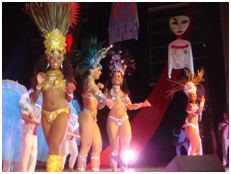 Winner though, and the screams from the audience were more than enough evidence for that, was the Golden Rose Samba School from Rio de Janeiro, which thrilled the crowd with their moves, and with their costumes which needed no wardrobe malfunctions to see quite a few husbands in the audience getting a wifely elbow into their ribs while told ‘close your mouth darling’.

This opening show clearly was but a promise of things to come when the 2 hour parade goes underway on Saturday afternoon in the heart of Victoria, when the floats will bring out the Carnival best and when one attraction chases the next down the streets of the Seychelles capital city to the delight of the expected 20.000+ spectators lining the route. 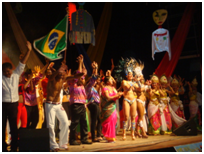 (All performers returning to stage to take a combined bow for their winning performances / all pictures taken by taken by W. Thome)

After the parade will a number of local music groups and performers entertain the crowds deep into the night and food stalls and impromptu bars will provide the sustenance to see spectators turn into carnivalists themselves as Victoria’s largest street party will go on into the early hours of Sunday, only to continue with another Food Fiesta and all the floats being on display, close up and personal, for Victorians and Seychellois from the other islands at the national stadium.

The Carnaval de Carnivals is now not only the arguably most important festival event in the Seychelles but has also been made a key event in the annual calendar of the Vanilla Island group, where the member islands throw their own weight behind selected festivals held from La Reunion over Mauritius, Madagascar, Mayotte and the Comoros to the Seychelles. And for the readers the question must arise, why are YOU not in Victoria for this event? Make a date with the Creole island paradise of the Seychelles next year, as Emirates will promote the even with special fares as will other airlines flying to Mahe. Seychelles, truly Another World.

Like Loading...
PrevPreviousIt is Carnival time in the Seychelles
NextPresident Kibaki commissions phase one of new Isiolo airportNext

#Airbus steps up its quest for new talent by creating some 13.000 new jobs