Heading to BIAS 2012 and to the Kingdom of Bahrain

The often said words, Small is Beautiful gained a new meaning for me as I headed to Bahrain on Gulf Air, ahead of the Bahrain International Air Show 2012 I was going to attend. Cruising at 39.000 feet above sea level on board a Gulf Air A319, I found myself alone in the business class cabin and the centre of attention of the crew. On boarding, escorted from the lounge in Entebbe to the open door of the aircraft by one of Gulf Airs ground handling staff, I was greeted by name by the airlines station manager and the cabin services manager, which left a cryptic smile on my face, considering the words charm offensive I had used in several articles written after the inaugural flight. If this was part of it, for sure it worked and put me in the mood for the 4.45 hrs flight from Entebbe to Bahrain. I had last travelled on Gulf Air just before they left the Entebbe route, and when they were code sharing with Uganda Airlines, itself already in winding up mode. That flight was packed, my ID ticket ended me with a downgrade to economy class as the front cabin was full and I was in the end happy to be home again in Uganda, not looking back.
What a difference this flight was, and not because I had the front cabin to myself I sneaked back to economy to see the service there and must say that inspite of the ghastly hour, the flight left Entebbe at 03.20 hrs local time, the crew was cheerful, attentive and the passengers seemed happy, most of them having an empty seat besides them as the load was only in the 60 percent region.
I asked one Musoke, other names withheld on his request when he figured that I was going to use his name, why he had opted to travel with Gulf Air, and he did say that he got a good deal for his trip, better than on Emirates, leave alone British Airways or some of the other carriers and wanted to try some other airline to compare service and punctuality. Well, later on, as we walked off the aircraft in the morning after landing in Bahrain, he was convinced he had made the right choice, having had a row of 3 seats for himself for the night flight and gotten a hot breakfast once cruising altitude had been reached, with TWO choices of the main dish he did not fail to point out, having apparently settled for the foul medames, an Arabic cooked morning dish. I in fact had settle for the same dish when having my breakfast before landing, well presented and tasty indeed, with the traditional flat bread, preceded by some warm croissants into which the butter just melted ever so nicely.
Meanwhile though did the words of Gulf Airs Chief Services Officer Marcus Bernhardt at the airlines launch on the 05th December last year at the Kampala Serena Conference Centre came back to me, when he mentioned the Small is Beautiful as almost a corporate philosophy, making it quite clear to the audience that it was not the size of the airline which mattered but what service and product the airline actually offered, and consistently offered for that matter.
Gulf Air, today, is clearly one of the smaller airlines with a home base in the Gulf, but nevertheless covers the entire region like no other, a testament to the legacy of the early years when the airline was owned by several countries and was THE pan Gulf carrier. Others countries own development strategies, varying visions and perhaps even national pride, especially after Emirates was launched and turned into a success story, led to gradually one shareholding nation after the other to go their own way, reducing Gulf Air to become the sole national airline of the Kingdom of Bahrain. Smaller, but equally determined to grow and spread their wings, with a new CEO and a new vision of how to achieve that, GF has served notice of intent to their rivals, that the airline is here to stay and then some more. The introduction of a Sous Chef on board, not just on long haul flights but as seen now on the medium distance flight from Entebbe to Bahrain too, is one such service element bound to attract added traffic, and I for one liked having the opportunity to discuss menus and ingredients of Arabic cuisine with my chef on board.
Media trips of course almost always contain an element of show boating and red carpet treatment, but on the flight I had the distinct feeling, besides the initial greeting initiated surely by the station manager, that the crew was giving their best as a matter of cause, with the added advantage of being alone, a shame really considering the comfort of the extra wide seats and the deals apparently available for Ugandans wanting to try out flying upfront without spending their entire shopping budget before even reaching their destination, be it across the Gulf region or beyond to Europe or Asia, with emphasis on the Indian subcontinent.
My journey ended in Bahrain to cover the first major air show of 2012, the Bahrain International Air Show, where Gulf Air also serves as Official Carrier and major corporate sponsor of the event. And of course, Gulf Air is also the official carrier for the Bahrain F1 race, and it was a most pleasant surprise to see this bird on arrival, an A330 painted in the F1 colours flying the message across the Gulf Air network that in 2012 it is back to business as usual. 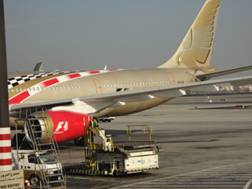 (A Gulf Air Airbus A330 painted in the colours of F1, docked at the terminal of Bahrains international airport)

In coming days my reporting from Bahrain will mainly focus on the events at the Bahrain International Air Show 2012 but I intend to do some sightseeing too and incorporate such elements too. To start with, while I do see similarities with say Dubai, Abu Dhabi and Sharjah, Bahrain on first impression appears more intimate, more personal, a work still in the making and traffic for one is easy flowing, compared with rush hour Dubai in downtown areas or across the bridges or along the highway to Sharjah.
Parallels I can see, but also uniquely different features, more of the old and ancient, more of the history which made the Gulf and made Bahrain. Watch this space!