Kenwyn House, a piece of Seychelles history at the heart of the Carnival experience

When the Carnaval de Carnivals parade juggernauts through the centre of Victoria, many vantage points avail themselves to capture the floats and performers through the lenses of cameras, and visitors from all over the world queue, jostle for positions and push for the front row on the pavements of the city, where often people are standing 10 deep and more to get a glimpse of what is going on.

Luckily, journalists accredited to cover the Seychelles Carnival Festival do have a dedicated press access area right in front of the famous Kenwyn House, which since the start of the festival in 2011 served as hospitality hotspot for the media and made some by now famous photographs of floats possible from the elevated position of the first floor balustrade or the second floor balcony.

The house itself is by many considered even more famous than the Seychelles Carnival, something the archipelago’s tourism gurus would perhaps argue over, but for sure the house is older, a lot older in fact, with its history dating back to the year 1855. This is according to the records found on premises but also by the explanation of those who should know, the staff working there, the staff at the tourist board and the Ministry of Tourism and the aficionados of classic Seychellois colonial architecture, which manifests itself at its Sunday best at Kenwyn House.

Declared a national monument in 1984 under the National Monuments Act, the building was in 2003 completely renovated by the owners Flawless Ltd. which, while using it to sell ‘flawless gems and diamonds’ on the first floor of the building, has set aside much of the classic residence to showcase Seychellois history, art and books, making it from all I could establish, the largest permanent art gallery across the entire archipelago.

Some of the furniture still on display at Kenwyn House dates back to the time the first tenant moved into the building in 1855, according to the records seen a Dr. James Henry Brooks, the then Chief Medical Officer in the colony and in another capacity also the German Consul. Dr. Brooks lived in the building until either 1878 when The Eastern Telegraphic Company from the UK bought the house from him or until 1879, when he – according to other records – moved out to take up residence somewhere else. The name eventually changed to Cable & Wireless, which then housed their engineers there who were setting up the communications base on the main island of Mahe before later on the respective General Managers were accommodated at Kenwyn House, as the building was named during this period by staff of the communications company. It could not be established if Dr. Brooks had initially given his house another name, but the name Kenwyn for all purposes stuck and it remained so until modern days.

Today, the entire ground floor, at times described as the ‘basement’ is dedicated to the art gallery and Seychelles’ top contemporary artists showcase their work, among them Michael Adams, George Camille, Camille Mondon, Alyssa Adams and Evelyn Fanchette, to name but a few.

The media pack though was more interested in cold drinks and the readily available snacks, served by the staff of Kenwyn House to everyone who had their media accreditation badge on display, and like in previous years Kenwyn House was a haven for a quick break, tanking up with a drink before resuming positions to capture the parade, or the dignitaries led by President James Alix Michel sitting in the specially erected tent across the road in front of the Ministry of Tourism and Culture.

Yet, just a few steps into the building, through the jewelry showroom, tend to reveal the majesty of this landmark building, visitor book open and ready to be signed. Old furniture, the wooden floors and wall panels and the book shelves, stacked with classics as well as contemporary books, describing the beauty of the Seychelles besides ‘KOLONY’ written by my good friend Glynn Burridge, who also freelances as copy writer for the tourist board, where he produces less scary write ups compared to the contents of his first, and widely acclaimed novel.

It was at Kenwyn House infact where Glynn handed this correspondent a signed copy of his book, specifically recommending ‘Don’t read at night’ in clear reference to the content, which by the looks of it may well be turned into a feature film sometime in the future. The story goes back to 1823, when combined British and French naval forces ‘finally launch an attack against remnants of the rogue Pirate Republic of Libertalia, seeking to dislodge them from their stronghold on the island of Madagascar. Anticipating the assault, the hard core of pirates with their degenerate tribal allies manages to escape aboard HMS Valorous, the Royal Society research vessel with a contingent of scientists under the command of a particularly brutal and sadistic fugitive captain, Eric Liddle.

During a storm, Valarous with its now deeply divided crew, is shipwrecked on a remote atoll of the Seychelles Islands, setting the scene for the emergence of a monstrous, latter-day pirate cult with a dark secret … and fresh taste for blood’.

This description of the book’s content is perhaps just from the imagination of Glynn’s explorer and adventurer mind but then, knowing the history of the Seychelles Islands and that truly pirates used some of them to hide, recover from raids and rest from being hunted by the navies of Britain and France, there may yet be a grain, or several, of truth in it. Having read deep into the 625 pages, I can however confirm that reading it at night, when a storm howls outside and eerie cries of birds are only partly audible before their sound is swallowed by the gusts of wind, may not be the kind of book the faint hearted should read. 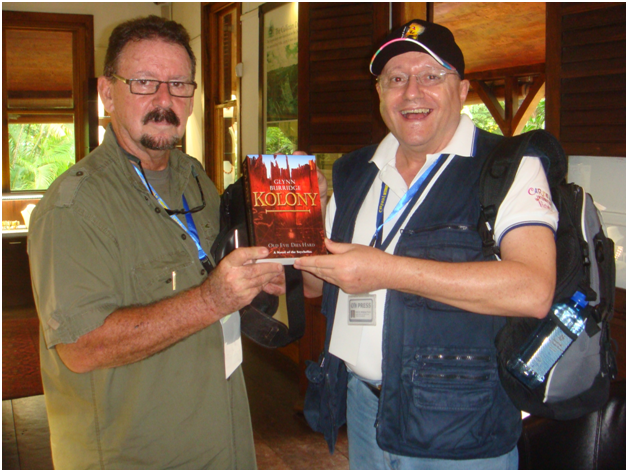 Back to Kenwyn House though – it is as fine a piece of historical architecture as can be found today in the Seychelles and along with other old style villas and commercial buildings worth a visit, when criss crossing the island, by bus at still 5 Seychelles Rupees a trip, or when being part of one of the organized tours which also takes tourists to such places as ‘Takamaka’ where again, some old buildings are lovingly maintained to showcase that the archipelago is much more than just sun, sand and fun.

An appropriate time, a few days after the Carnival ended, to say thank you to my hosts of the Ministry of Tourism, the Seychelles Tourism Board and, last but not least, the staff at Kenwyn House who again offered the sustenance during the nearly 3 hour parade, without which some of the media pack would not have managed to complete their assignment without suffering withdrawal symptoms from lack of a cold one. Until next year, when the Carnaval de Carnivals, the Carnival International de Victoria will be held between April 25th and 27th in Victoria, on the main island of Mahe / Seychelles. See you there at Kenwyn House on the 26th of April 2014, the day of the next parade.