L’Esperance – A Rwandan orphanage with a difference 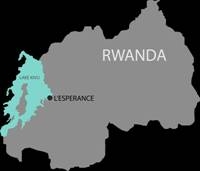 When on the newly created Congo Nile Trail a few weeks ago, which hugs the shores and mountains along Lake Kivu from Kamembe to Gisenyi, a side trip to a unique orphanage, LEsperance in Kigarama captured my attention and imagination to such an extent, that it has not left my mind since then. Over the holiday season I was repeatedly thinking of those children, and their care givers and foster parents, especially as Christmas Eve came calling and when Christmas Day finally dawned. It reminded me of what I had seen there, and how like magically LEsperance was gifted with the spirit of Christmas, seemingly for the entire year. Christmas, after all, is supposed to be a season of sharing, especially with the disadvantaged, the less fortunate and those in greater need than oneself, and at LEsperance that spirit was ever present, even in November when I visited, and surely prevails throughout the year.

Set high in the hills above Lake Kivu, this orphanage is unique in many ways, not the least for aiming to become self sufficient in all their aspects of daily needs, although the Rwandan government has thankfully stepped in to absorb school and education fees for the children who found a home in the truest sense at LEsperance.

128 children and infants were at LEsperance at the time I visited in November and we, I was part of a media invitational tour of the new Congo Nile Trail just before it was officially launched, were received with such warmth and genuine affection, that there and then I decided that this was a story worth telling in greater detail.

LEsperance is part of a German based NGO, Childrens Aid International, and came to Rwanda in 1995, the year after a gruesome genocide had killed over 800.000 innocent men, women and children, and left tens of thousands of orphans in its wake. However, in the midst of this tragedy of epic proportions, the idea was conceived to bring LEsperance to Rwanda and create a place of refuge, safety and caring love for those little ones who had survived, and yet unbeknown to many of them due to their tender age also had lost their entire families. Initially set up to cater for but 100 children and infants, LEsperance is now the home to 128, some of them still there since they first were welcomed in 1995 as babies and toddlers while others have since then joined. Yet others have completed school, gone to university, graduated with honours and are now old boys and old girls of LEsperance, the ONLY home they have ever known since a cruel fate had robbed them of their families in 1994.

Volunteers from around the world, the United States, the Netherlands and even from Poland are giving their time and effort to work with the children and make their own personal contribution.

The team at LEsperance is led by self professed dictator Victor Monroy, who presented himself as anything but a dictator but a gifted communicator, able leader and visionary head of the Kigarama orphanage, intent to create a totally self sustained facility able to feed itself, educate the kids and offer them the opportunity to become anything they want to become, anything they want to be as he put it to me when we discussed his work. Given half a chance to talk about LEsperance Victor would launch into both history as well as the future of the orphanage, all at once, buoyed by the chance to get the message out to the world what good has been achieved and how much more could be accomplished given the right support with the right tools, through donations aimed to expand and improve the existing facilities. And going by the impressive list of existing partners, he and his totally committed team of volunteers and staff have made impressions around the world:

Engineers without Borders from the Johnson Space Centre in Texas and from Colorado University
The Manna Energy Foundation, United States
A Better World, Canada
Global Water Challenge, Washington DC
Catholic Relief Services
Birambye International, United States
are just a few major names who have in the past and continue to assist LEsperance at Kigarama to make certain that the children there not just have a chance of a productive future but are equipped to take such chances with both hands. 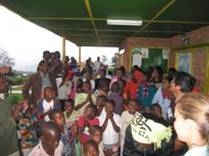 (The children all assembled and greeted us with welcome songs, written and composed by their own choir. The choir also produced a CD with a dozen compositions which can be ordered through Victor Monroy)

Set in over 20 acres of fertile land, LEsperance is growing all their fresh produce themselves, and having planted hundreds of avocado and mango trees are also able to sell to nearby markets, generating sustainable income for the orphanage which can then be used to purchase other items such as sugar, salt, cooking oil, detergents and a range of other goods needed every day to keep the wheels turning. 6 houses are the homes of the children, each one led by a member of staff who is the focal point and mother and father to the kids, someone they can relate to and can confide in.

Why am I writing this story now? Because the holiday season is upon us and some of you may be moved enough by this narrative to visit the websites of the orphanage via www.lesperancerwanda.org, or else www.victormonroytrust.com or www.icatis.org/birambye where more details on this place of Christmas spirit can be found and through which donations and support can be channeled. This time of the year is a time of goodwill to all people in need, a time of charity so do the needful and let the spirit of Christmas remain at LEsperance for the next 366 days 2012 is a leap year after all and well beyond. Thank you, on behalf of everyone at L’Esperance’!