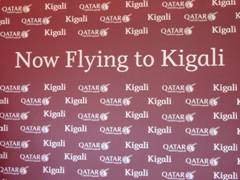 QATAR COMES TO KIGALI, AT LAST

When I checked in for the inaugural flight to Kigali in Entebbe at noon yesterday, it was clear from the first moment that this was going to be different. At the document pre-checking point a TRULY friendly smile, a professional look at my passports relevant pages and not aimlessly leafing through it as often seen elsewhere, my e-ticket checked, booking status ascertained and promptly escorted to the Qatar Airways branded red carpet, well in their corporate colours anyway which are not exactly red of course, where a QR staff member sees to it that the check in by the handling agents is performed to their prescribed standards.
I found my boarding pass ready, my lounge invitation ready and when my baggage was labeled VIP I knew this was going to be an experience worth having, and worth writing about.
The flight between Entebbe and Kigali, just over half an hour, was absolutely too short to do proper justice to their award winning inflight service, but enough to give a glimpse into what it must be like on long haul flights.
For a moment, although the interior of the brand new A320 was of course state of the art 2012, I felt transported back to the glorious days of the Concorde, where from the lounge in Heathrow, which was a class apart from the best even back then one would be escorted to the aircraft and where from being greeted by name on entry to the superior attention by the cabin crew to the minutest details or most exhausting requests from guests on board, note guests, not passengers, the service made all the difference and created a brotherhood and sisterhood of frequent fliers for whom simply nothing else would do.
The handful of other guests in the front cabin, including Qatar Airways CEO Al Baker and the airlines Senior Vice President Marketing and Corporate Communications, perhaps did bring the best out of the crew but it felt real, not staged, not a one off performance, though I like more opportunities to ascertain that particular aspect when travelling incognito instead of wearing the invisible badge of an invited guest. 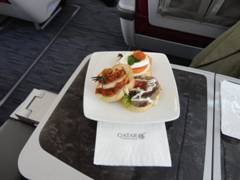 Inspite of the short flying time, snacks were served as was the full range of drinks offered, vintage champagne inclusive, but with work awaiting at the other end it was water for me, something I intend to remedy on the way back to Entebbe in a few days of course. The catering, needless to say, had come all the way from Doha, if for nothing else but to assure the quality and presentation which earned Qatar Airways the coveted 5 star label for fine dining in the sky and the Skytrax Airline of the Year Award 2011. I had the feeling that the crew knew exactly what needed doing just at the right moment and while never hovering they were only an eye contact away, a little wink and they would be at ones seat asking how to be of service.
Many might think the 5 star stuff is simply a marketing ploy, a gimmick but when experiencing it directly and close up it is for real and makes other airlines, even the better ones I regularly fly on, look almost a class apart.
For inaugural flights of course everyone is at their Sunday best and it was no different at Kigalis Kanombe International Airport, where first the fire engines extended the traditional greetingsin form of a water curtain the aircraft drove through, when exiting the runway and turning towards the apron area. And no sooner had the engines been cut did the sound of drumbeats from Rwandas best drummers echo across the parking area, resonating off the terminal building, as first the Qatar Airways management team left the plane to a red carpet welcome by government, civil aviation and airport officials besides a large number of invited guests from a cross section of industry, travel and tourism. Dancers, performing Rwandas captivating dance creations, added to the colour and visual impressions before everyone was whisked away to the party area, where the inevitable official speeches and presentations took place. 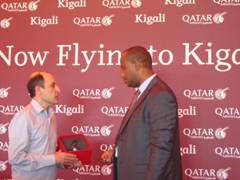 (Seen here are Qatar Airways CEO Al Baker with the Rwandan Minister for Infrastructure the Hon. Albert Nsengiyumva, presenting him with an Oryx statue)

Al Baker made it clear why Kigali / Rwanda had become the 17th African destination, describing the parallels between Qatar and Rwanda and responding to the need for more connections to the wide world, which travelers from the land of a thousand hills can now enjoy and through which the world can now come to Rwanda. Comparing Qatar Airways and the rest to being in a chauffeur driven limousine with an ordinary taxi ride was of course as much tongue in cheek as it was probably also true, not that the competition would be overly enthusiastic to be told point blank how the 5 star airline thinks of itself.
When speaking on the airlines plans for the wider region, answering a question from this correspondent, Al Baker then revealed that Qatar Airways was going to increase the frequencies from Doha to Dar es Salaam from the present two to three a day from a yet to be named date later this year. One of the flights, as mentioned elsewhere already will go on to Mombasa / Kenya from 15th August while Zanzibar will follow probably a month or two later as an extension of the second QR flight to Dar, the new third service then terminating and doing an immediate turnaround. Other QR staff present at the function later elaborated on this comment and attributed the announcement to the steady growth in demand for seats on their present two flights a day. When rather than if a third flight to Nairobi would be announced was met with smiles instead of answers and dates, leaving it open to speculation just when that would happen for Kenya, though an educated guess would be sooner rather than later, just as new aircraft become available, now delivered to the airline at the fast pace of 2 a month.
Rwandas tourism industry was swift to hail the arrival of Qatar Airways with daily flights with key individuals like RDBs Rica Rwigamba calling it exciting news while Manzi Kayihura, at one time CEO of RwandAir and now a key player in the countrys safari sector, talked about the new opportunities to have the world come to Rwanda on a quality airline with daily connections, opening up in particular Rwandas new and emerging markets in the East.
In subsequent discussions and meetings with QR staff present in Kigali it could also be established that the airline is now seeking to establish ties with Rwandas tourism fraternity and business community, to participate in high profile local events like the annual gorilla naming festival Kwita Izina, this year due in the week leading up to the 16th of June. Already advertising in local dailies but also key locally produced magazines like The ServiceMag (www.theservicemag.com) or The Eye the insiders guide to Rwanda and Burundi (www.theeye.co.rw) the local staff of QR in Kigali confirmed a keen interest in outbound flights and encouraging forward bookings, confirming that the new route was indeed chosen with load factors in mind and not just to get ahead of other competition, from within the Gulf area but also from European carriers. 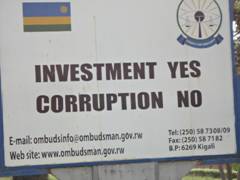 And when leaving the airport for the city of Kigali, this sign awaits visitors with a clear message that they are entering a corruption free zone, a place where doing business has to be done by the book and not by contents of the wallet, one reason why Rwanda has become the darling of the West and a much sought after partner from countries around the world. The arrival of Qatar Airways will undoubtedly enhance Rwandas future growth prospects, not surprising by the way now that the Rwanda Development Board can guarantee that starting up a business in the country can be accomplished within 6 hours, something even few of the developed countries can claim to have achieved and certainly no other country on the continent of Africa.
Qatar Airways got a very warm welcome indeed, and not just in terms of the weather as the blazing sun over Kigali shone on the plane on the tarmac and the visitors at the party tent. When the next destinations across the EAC have come on line, Kilimanjaro, Mombasa and Zanzibar, QR will have established itself as the only one foreign airline connecting literally every corner of East Africa with the rest of the world, a novel achievement and something they, as well as us here in this part of the world, can truly be proud of. Watch this space.