Regular plane spotters were the first to see the landing lights of RwandAir’s brand new B737-800 emerge from the distant clouds as shortly before 3 p.m. local time the long awaited ‘bird’ came towards the runway of Kigali’s Kanombe International Airport. The assembled crowd of ‘normal’ onlookers, and the invited guests from government, the diplomatic corps, RwandAir staff, travel agents from across the RwandAirnetwork invited for the event and the media were then treated to an added spectacle as the plane did a classic fly past over the runway before ascending again, doing a ‘360’ and the lining up for landing.

Fire engines extended the traditional ‘greeting’, creating an arc of water from both sides over the plane as she turned into the taxiwaytowards the apron and the sound of Rwanda’s best drummers then echoed across the tarmac in a crescendo as the plane came to a stop.

The airline’s CEO John Mirenge emerged first from the plane, followed by Boeing executives and other RwandAir staff who had gone to Seattle to take delivery of the aircraft and a helicopter washovering overhead to capture the pictures for the local and international news.

A select group of invited guests was then allowed to inspect the interior of the plane before everyone was heading to the party tent, where champagne was on ice, to be opened just as soon as theobligatory speeches had been delivered. And there was some more news to be told by the CEO, who revealed the airline’s strategy and plans to own and operate 18 planes by the year 2020, which at that time would also include a long haul B787 Dreamliner for intercontinental operations. 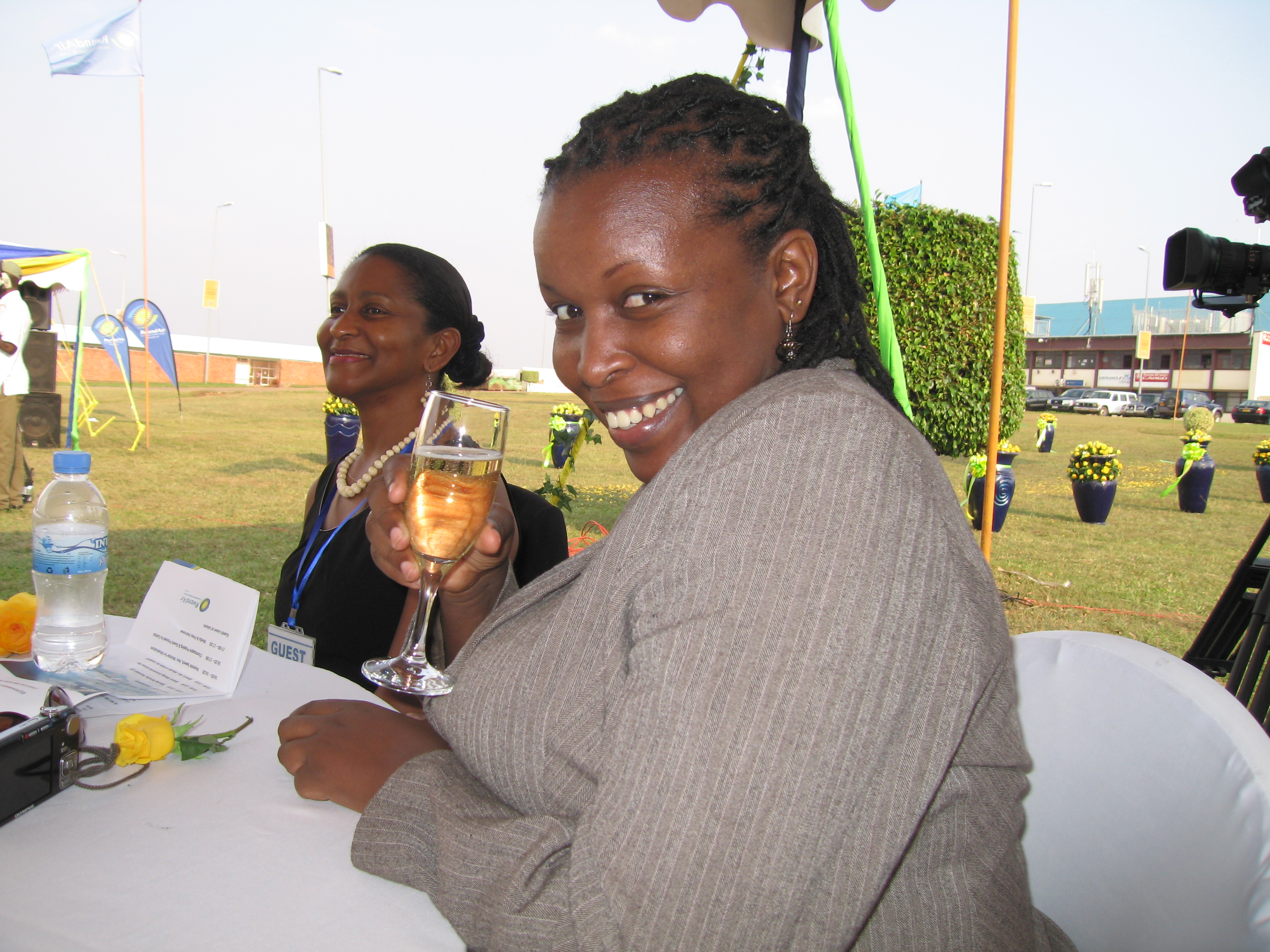 ‘Two years ago we were a virtual airline, with two leased planes. Now we are a real airline, with 6 owned and dry leased planes’ said John Mirenge to thunderous applause from his Rwandan compatriots as he went on to explain that this was the start of RwandAir’s future. ‘Two years ago we carried an average of 5.000 passengers per month and today we carry an average of 15.000 passengers a month’ he wenton to explain, which was attributed to adding both domestic as well as regional and continental destinations to the RwandAir network.

The airline’s second NG B737-800 is due to arrive during the third week of October and can expect an equally enthusiastic welcome. Both aircraft will be deployed on the routes to Johannesburg, nowserved four times a week, and to Dubai via Mombasa, which is presently served three times a week with an early option for an increase in frequencies too. The ‘older’ -550’s in the meantime are deployed to West Africa and as demand requires the route to Dar es Salaam and Nairobi, while the CRJ’s are used for the daily flights to Entebbe and the ‘off peak’ operations to Nairobi.

These two B737-500’s on lease from GECAS will remain on the fleet for at least another two years, at which time it is expected that RwandAir will substitute them for, very likely owned, NG’s in line with their strategic plans for expansion. RwandAir – Fly our dream to the heart of Africa. 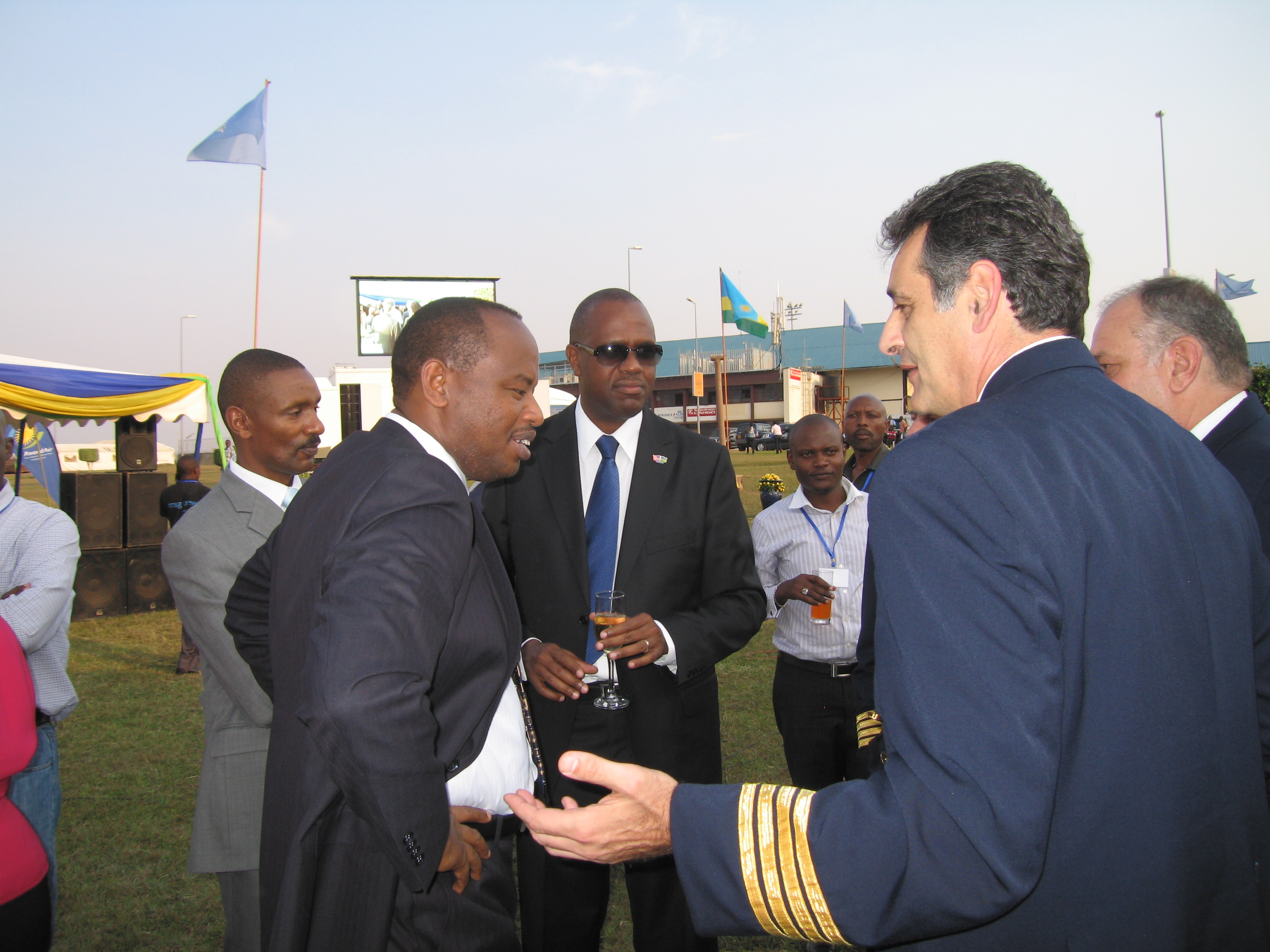 (CEO John Mirenge in the middle seen here with the Rwandan Minister for Infrastructure the Hon. Albert Nsengiyumva and one of the three captains who piloted the plane from Seattle, via Reykjavik and Istanbul to Kigali)