#SerenaHotels – where constantly upping the game is engrained in corporate philosophy 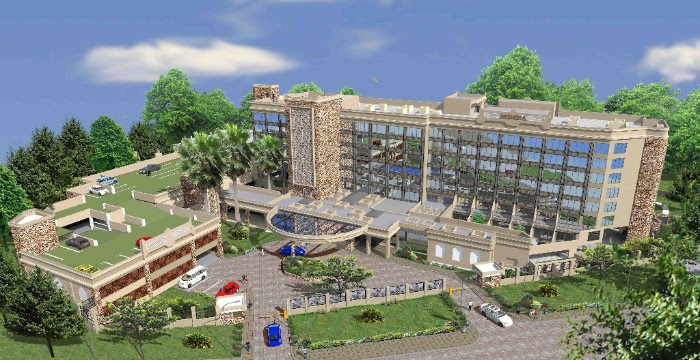 First to start a round of major work projects amongst Serena’s city hotels was the Dar es Salaam Serena Hotel, soon to be followed by the Kampala Serena where an additional 36 suites and rooms were added besides new meeting and restaurant facilities including a first for East Africa, a dedicated champagne bar. The Polana Serena in Maputo followed suit with an upgrade of Mozambique’s grandest five star hotel and today is the Nairobi Serena Hotel showcasing the end of phase one of the ongoing rebuilding, refurbishment and modernization.
I stayed at the Kigali Serena Hotel when a few years ago the third wing was completed and several times since, also witnessing the constant upgrades and work carried out to keep Rwanda’s leading hotel at the very pinnacle of their trade.
I stayed in fact in all of Serena’s city hotels – with the notable exception of the Polana – and am in a perfect position to compare the changes seen over the years and put them into a proper perspective, within Serena’s pecking order and of course in comparison with their surrounding market places.

(View of the ‘old wing’ of the Nairobi Serena Hotel, also soon to be remodelled with an additional floor added to boost the room inventory)

As the pictures show does old and new look quite different, besides the addition of an extra new floor also demonstrating how the rooms were expanded by pushing the window fronts to the very edge of the building and incorporating the previous balustrade into the rooms, giving guests more space.

(New and New – inside and outside the rooms)

New technology is now available for guests who no longer have to struggle with adapters as the bedside – and work desk sockets – now offer a USB port and a universal multi socket able to accommodate plugs from around the world.
The corridors too have undergone a transformation as guests, when walking to their rooms, will appreciate, especially as the sound absorbing carpets and wall decorations will almost entirely do away with the noise levels from outside one’s room. 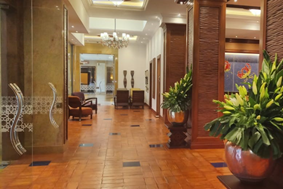 (The new look lobby of the Nairobi Serena Hotel)

But there is of course a lot more to the rebuilding than meets the immediate eye.
The hotel now has its own parking garage with several levels with a capacity of 120 cars, VIP parking and parking for guests with disabilities. This is in addition to the parking across from the hotel which will remain in operation when the garage is full.
A brand new ballroom has been added, also serving as a conference facility extending over 450 square metres and which includes breakout spaces – Frangipani and Allamanda – and two additional smaller meeting rooms, Orchid and Lilly.
96 rooms are available in the new wing, including four executive suites, seven Deluxe Twin Rooms and 84 Deluxe Queen Rooms. 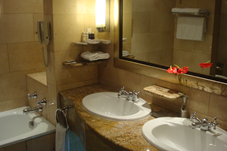 Notably will a new Executive Lounge now invite entitled guests into an atmosphere of peace and quiet, located in the new 7th floor – which was added on the existing hotel structure previously comprising only 6 floors.
In the lounge will guests be able to enjoy breakfast and a happy hour in the evening, similar to what is on offer and has been described here in an earlier article at the Kampala Serena Hotel.

Serena’s CEO Mahmud Jan Mohamed told ATCNews: ‘We are pleased to see the evolution of the hotel to support the ever-changing needs of our guests. Service excellence is an intrinsic part of our culture, developed over the last 40 years. Enhancing of the Pan-African design features, coupled with modern amenities and caring service demonstrates our commitment to meeting the expectations of our clients. Through the use of unique handcrafted woodwork and motifs, water features and beautiful landscaping, we have been able to preserve our unique identity‘.

Still to come online and expected to open later in the year will be a new fusion restaurant aiming to complement the award winning Mandhari, the hotel’s fine dining restaurant, and the all day dining Cafe Maghreb.

Phase two of the project will kick off later this year and is expected to be completed next year at which stage 199 suites and rooms will then be available for discerning guests who expect nothing but the best, rooted in local culture and excellent service tradition.

(Impression of the Nairobi Serena’s New Look after completion)

Closing on a personal note and sharing a decades’ long relationship with the Nairobi Serena have I seen this hotel grow from its initial three star offerings when launched in the mid 1970’s and then transform to five star standards in the late 1980’s and early 1990’s when Tig Barrasford was CEO of the Serena Hotels.

It was him who launched Serena’s march into the top market bracket and who transformed the vision of the company’s chairman, Prince Amyn Aga Khan and of the board into the kind of the company Serena Hotels today is.

I stayed at the Nairobi Serena Hotel for nearly 3 1/2 years in the late 70’s and into the early 80’s and those were some of the best years of my life, professional and personal.

Expansion into new markets in Eastern Africa was then overseen by the present long serving CEO Jan Mohammed who proved to be a worthy successor to Barrasford who continues to be held in high esteem by the Serena workforce.

Serena Hotels set itself apart from other hotel groups by – across its locations in Kenya, Tanzania, Uganda, Rwanda and Mozambique – the Democratic Republic of Congo will come on line with a new 5 star property in H1 next year in the city of Goma – phasing out expatriate managers.

Apart from visiting chefs who periodically come in for food festivals and share their skills with their Kenyan, Ugandan, Rwandan, Tanzanian and Mozambique counterparts, has Serena succeeded with a well trained and highly skilled ‘local’ workforce and managers, unlike many other hotels which in this day and age continue to rely on an at times large contingent of expats to keep their properties up and running.

For added information about the company click on www.serenahotels.com