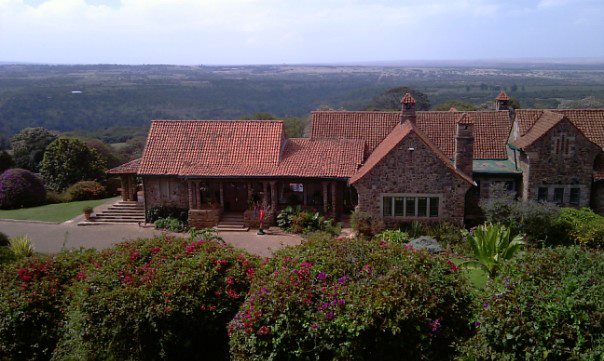 THE ABERDARE COUNTRY CLUB REBORN AT 75

The silence of the African night was suddenly shattered by the eerie cries of some peacocks, waking me from my sleep in the deep of the night. It was cold, very cold, but still I went to the window, lifted the curtains to see outside and noticed shrouds of mist and fog drifting by, illuminated by the spotlight from the top of the Honeysuckle Cottage, the topmost cottage at the Aberdare Country Club. It was the weather I remembered from days long passed, the eerie calls of the peacocks too, having stayed here during the foggy season several times before and needing almost a compass on one or two occasions to find my way around the extensive grounds.
I made the club my base for a few days while exploring the Aberdares and the nearer and wider area, including the clubs own 1.300 acres of a private game sanctuary extending up the Kamatongu hill. That private game reserve is home to Thompson and Grant gazelles, Impala, Zebras, Giraffe, Warthogs, Baboons and the elusive Leopard, to name but a few and plenty of birds of course too.
I had returned to the club for the first time in perhaps 15 years, drawn by memories and the keen interest to see, how the change of ownership last year had impacted on the two properties, the club itself and the often more fancied Ark. But first let us go down history lane for a bit, to understand the how and where from and even the who, as some individuals are probably forever linked to the properties and deserve a mention and a place in the Aberdare Country Clubs history book. 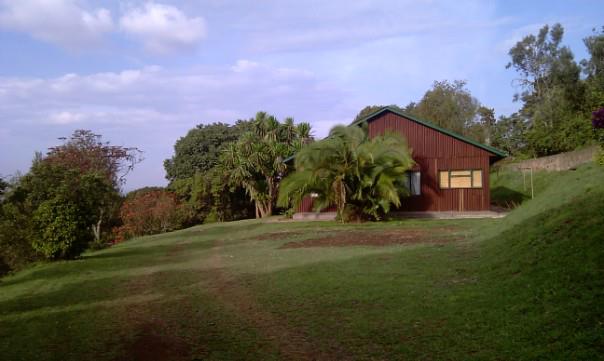 Going by all the information I kept since coming here first back in the 70s, met then and for long thereafter by the late Vena Johansson and of course the one and only Ian Hardy, and obtained since then from a variety of other sources, it seems the Steep, as the country side mansion was initially called by the original owners, was completed in 1937, after Robert, aka Mickey Spencer and Dot Lyons bought the land, located on the slopes of Kamatongu Hill, aka Ol Doinyo Larash and decided to build a residence there to make it their family home.
Designed most likely by Nairobi based architect Idris Davis, who is known to have designed the neighbouring Monte Carlo mansion in 1937 further around the hill, construction according to records found and through stories told, must have commenced in 1936 and the Steep remained in the family until 1970, when the founders kids Kevin and Storm eventually sold out. It was then renamed into the Aberdare Country Club and has ever since served as the base for the famous ship of the forest, aka The Ark, located inside the Aberdare National Park, though it eventually became a well known landmark safari inn in its own right.
Now in its 75th year, new owners Marasa Africa have invested heavily to restore the shine of the club and all cottages and suites have undergone upgrading with new bathrooms and soft furnishings, while lovingly maintaining the ambience of the main building, its rustic appearance, the extended terraces, all the nooks and crannies, the lounges and fireplaces and the wood paneled dining room which easily can take visitors back by decades into days long passed, offering classic hospitality as it was then but reloaded into the 21st century of course.
My own experience with the club and the Ark is going back to the days of Signet Hotels, Lonrho Hotels, Fairmont Kenya and now Marasa Africa, which bought the two properties after they appeared to being sidelined by Fairmont, showing remarkably little interest in them and instead concentrating their efforts on the Norfolk, the Mount Kenya Safari Club and their Mara Safari Club.
From the almost shabbiness of those latter days has in particular the Ark made a remarkable recovery with all bedrooms now having their own private bathrooms, small but offering all which is needed for a nights stay, when watching the game from the lounges is the visitors main activity, not taking a bath. The Ark got a new lease of live for sure as the refurbishments are nearing completion now. Nearly 43 years old since it was opened in December 1969 it is again as good as new to continue receiving guests through Noahs Port and taking them aboard. There the wagenis are stationary, sitting perched above the waterhole, also expanded, and watch the game parade by, buffalo, elephant, bush buck, giant forest hog and if lucky a rare sighting of a rhino or a leopard. Illuminated at night, the stream of game coming and going is never ending. 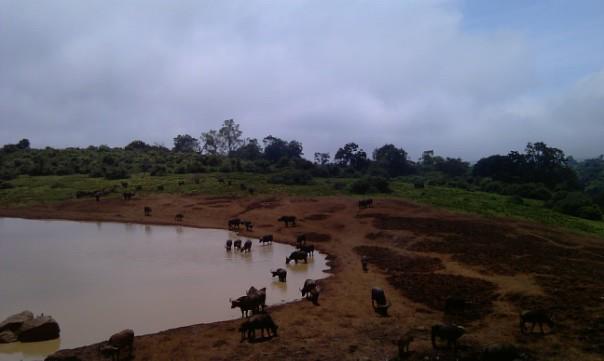 At the Aberdare Country Club, the golf course has been revived, the fairways cleared up and mowed, the roughs made less rough and in particular have the greens been restored. 9 holes of safari golf await the players, watched by warthog, impala, zebra and even giraffes, though it is the baboons which need watching as they are known to grab a ball which falls near them and run off with it. The loss of a ball though will not result in the loss of a point as such events are catered for by the clubs rules on natural hazards.
Meanwhile was the pool modernized too, given an extended wooden pool deck with new sun beds and umbrellas, while just behind it a brand new, state of the art Spa and gym has been constructed, due to open within days after my visit. A few finishing touches were still missing and trained staff was on the way to bring the added component of treatments to live, now that Spas have become an almost essential part of a vacation.
Next to arrive will be a couple of horses and the stables have been given a face lift and soon horseback outings will again be part of the clubs activities for visitors, able to ride across the sprawling grounds extending over 1.300 acres. This makes the Aberdare Country Club a destination in its own right, and with the added attraction of going into the Aberdare National Park, be it for a stay at the Ark or just a days game drive, there is plenty to see and to do. In addition is the Solio Game Reserve nearby, where rhinos can be found with ease, making the club an ideal base for a break from the city for anyone needing a break from the daily grind.
Sales and marketing activities are resuming now that the bulk of the work has been completed at the Aberdare Country Club and the new owners are happy to once again showcase it to Kenya and the world.
The club offers 19 two bedroom cottages, both twin and double and of course all with their own fire place as mentioned earlier, and in addition there is 1 three bedroomed and 1 five bedroomed cottage, plus one very posh suite, making a total of 47 rooms. 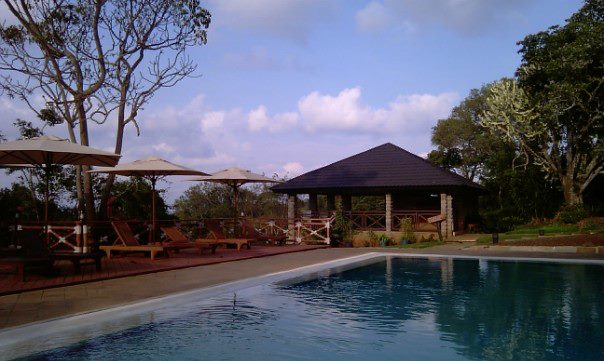 (The new pool at the old site)

A modern conference facility complements the accommodation and corporate retreats, strategy sessions and general workshops and seminars are regularly being held here, the tranquility of the club and its grounds perfect to provide as conducive an environment as is needed to accomplish the mission. And for that purpose, team building exercises can be arranged with some little prior notice, not a problem given the range of outdoor activities once again available. A bush breakfast perhaps, or a picnic lunch at a scenic spot or even a bush dinner on that special occasion, not a problem at all as the logistics are all in place and the clubs F&B team is eager to please.
For myself, returning to the Aberdare Country Club was like a homecoming, and already when seeing Kamatongu Hill from the distance my anticipation grew, increasing at the point of turning off from the main road leading from Nyeri to Nyahururu, then approaching the gate, now reconstructed to reflect on entry already the new things one can expect, and finally driving along the fairways up to the reception and have the main club building come into view. And then, after checking in, the first steps up to the terrace, one look across the manicured gardens, the peacocks in playful mood and all the good times come back, for me that is, and for others new memories are being created when the for the first time set foot into the club building.
Kenya has many magic places, has many places with a history, and the Aberdare Country Club, build 75 years ago as the Steep is one of those places which make Kenya today what it is. Full of history, not just wildlife, full of character and full of tradition, hospitality tradition, which does not come much better than found here, at the Aberdare Country Club. 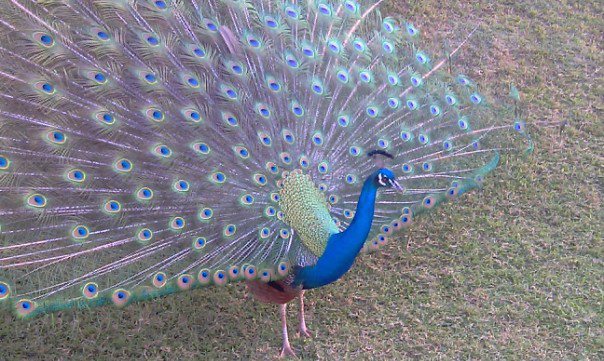 (One of the clubs permanent residents, peacocks galore here, colourful and vocal)

Rise and shine, that call must have been heard loud and clear, because once again, the club does shine and the staff, many of them long serving faithful, are playing their part in making every visit a special one for me. Be it Rose, the Arks manageress who has risen through the ranks over the years or good old Nderitu in the dining room, both remembered alongside many others for their excellent services and their smiles.
Getting to the club from Nairobi, via the Thika superhighway, takes about 3 hours by road, or a 30 to 40 minute flight from Wilson airport to the Nyeri airfield and then the short transfer by club vehicle upon prior arrangement.
Visit www.aberdarecountryclub.com and www.thearkkenya.com for more details on bookings, rates and activities.

Like Loading...
PrevPreviousFerry boat sinks but crew safe after successful rescue mission
Next9 / 11 remembered as the clock strikes the very moment right nowNext