Yes, why do wildlife criminals get off scot free so often? 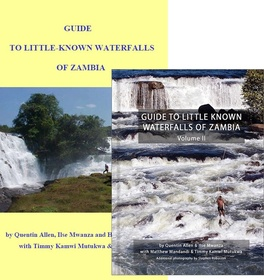 An author in her own right, the second volume of the Guide to Little Known Waterfalls of Zambia has just been published, has Ilse traveled her country and the wider region around Zambia extensively.
When recent stories emerged over rhino poaching and the arrest of some individuals, was she swift to go on record to express her disappointment over the lack of successful prosecutions, trying to get to the bottom of the reasons for that and giving her, as usual, outspoken critique:

Why do wildlife criminals so often get off?

First they are let out on bail, then they get off with a fine. So why are they sentenced so lightly? It’s because magistrates don’t take wildlife cases seriously (some people even insinuate it’s because of corruption), and because they don’t follow up on the hard work done by investigators, police, and scouts, by whistleblowers, journalists, and social-media campaigners, by giving stiff and deterrent sentences.

Much time, money and effort is spent on anti-poaching and wildlife education, NGO- and community activism is widely supported, and the Department of National Parks and Wildlife (DNPW, formerly ZAWA) and donors are doing their utmost to stop all wildlife crime. Alas, so very frequently they are let down by magistrates, resulting in everyone’s efforts counting for nothing.

The recent rhino-horn smuggling story is a case in point. On May 18, the DNPW arrested two Zambia Air force (ZAF) officials, one Namibian and a Zambian businessman for illegal possession of rhino horns. They were caught with two horns (one small, one large, from 1 rhino) at Embassy Park in Lusaka. The horns were traced back to Namibia where officials arrested at least three suspects in connection with the poaching incident in Etosha NP. Guess what? All are out on bail! Their trial is coming up on June 27th.

But the plot thickens. The horns, weighing nearly 4kg and valued at more than K3.5 million, were kept at DNPW’s HQ but disappeared. Who stole them? Who had access to the exhibits? There was one main suspect, Lameck Mumba, a recently demoted senior intelligence officer at DNPW. He appeared in the Lusaka Magistrates Court after being arrested and charged with theft by servant and destroying evidence. The smaller horn was found in his house, the larger had already been sold, but the money was recovered. Clear case of red-handed, one would think. But no, Mr Mumba is also out on bail (see Daily Nation, June 21, for the full story), awaiting trial on July 8.

The sable smuggler case is another case in point. Here investigators had worked for months to nab the evil-doers, ZAWA Investigation officers caught them with 12 live sable at a remote airfield, they were arrested and appeared in the Monze magistrate court where they were let out on bail. It looked so fishy that they were re-arrested and appeared in the Mazabuka magistrate court. There too they were let go on bail, and a short while later – for once our courts worked with amazing speed – they were tried and fined a mere K200,000 – a wholly inappropriate fine that didn’t fit the crime – and off they went, back home to S.A.

In May and April the Parks Department on its FB page lists many more cases of wildlife criminals being arrested – a Sioma man for 117kg of ivory, a Zambian for leopard skin, a Congolese for 87kg of ivory pieces, 2 Zambians for 2kg ivory pieces, 3 more Zambians for leopard skin – but we never hear the outcome of their cases. DNPW spokesman Kalembwe is only quoted as saying “the suspects risk attracting jail sentences if found guilty”, while Tourism Ministry’s PS Mwansa implores “it’s imperative that everyone joins hands to fight illegal wildlife activities”.

What really IS imperative is that magistrates do their work diligently and honestly, and the media follow up closely to reveal all shenanigans.