It has taken six years for Lusaka Park, the newest Zambian national park, to

Masebo) had promised openings from 2012 onwards.

The first animals, impala and puku, arrived in 2007 in a forest reserve that was to

were translocated into the park, all having been acquired from various game-

ranches, especially Chaminuka – in all, over 250 animals of eleven different

species. An additional shipment of ‘exotics’ was acquired by ZAWA from South

population for such a small area.

Lusaka Park was Dr Saiwana’s brainchild. He had seen the Nairobi Park, or so it

was said, and decided Lusaka ought to have something like it. Being Director

General of ZAWA at the time, he had the means and the power to realise his

A plot of land on the outskirts of Lusaka, a degraded GRZ forest reserve, 46km sq

had to be moved before game could be translocated, and Zambia’s National Park

Normally, when establishing a park or game reserve, the habitat is evaluated as to

its suitability (environmental assessment). Preferably it should be located far from

staff housing, etc) prepared before any animals arrive. But ZAWA did things

backwards, first bringing in the in the animals, and then worrying about

Adjacent to the Park a large industrial estate is being developed. The Chinese-built

road network is done, and small enterprises and light industries have moved in

and set up shop, a wonderful source of potential poachers. Poaching by

neighbouring Shantumbu villagers and Bauleni residents is already a problem.

The present vegetation of the Park is scrub, partly miombo on higher ground, and partly

undifferentiated, with no marked dominance, more especially in the lower-lying south. The entire

area has been cut over in recent years and continued cutting has held regeneration back. …

higher ground there is a red or brown sandy loam or sandy clay loam, while the southern, lower area

In short, the Park is located in thoroughly unsuitable habitat. There are no trees,

certainly no shade trees, there is no surface water, which means water must be

trucked in by tanker and bowser, and the rocky outcrops everywhere are likely to

be dangerous to animals’ mobility. The dry land and scraggly miombo shrub

doesn’t offer grazing or browsing to the inhabitants, especially not the giraffe,

with the result that, when game-viewing on bumpy roads, game remains elusive.

But enough of history and background, and back to the present. 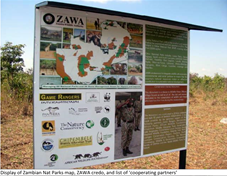 There was much pomp and circumstance at the opening ceremony, we saw on TV.

The President and his large entourage were there, Minister of Tourism Kapata and

(now NPWS) Wildlife- and other police-officers, and of course the press.

Conspicuously absent, though, were the Wildlife NGOs and individuals who had

maintained the park since its inception; they had not received an invitation.

There were speeches and a march-past, the unveiling of a memorial to fallen

wildlife heroes, game viewing on freshly-graded roads and rhino-watching from a

new viewing platform. The finale was a luncheon at the picnic site where axis deer

and impala were on the menu! What an odd message to send out: “first watch

In his speech, Lungu called for the creation of conservancies and game-ranches

efforts” and “preserve forests and the water table, while adding beauty”. He

called for more game reserves, especially near towns, so that ”recreational

facilities, hotels and restaurants, could revitalise and enhance the quality of

people’s life, and bring them closer to nature”. He forgot to mention that we

already have 19 national parks, half of them defunct, because GRZ/ZAWA is

unable to maintain them. Why have more?!

and one pangolin”. He added that “initially LP was to be a sanctuary for injured or

orphaned animals” but now it was to provide “walking safaris , bird watching,

I have been visiting Lusaka Park a few times when it was still closed, mainly during

the time when some 150 sable antelope had been ‘parked’ here, waiting for

export permits. As these were not forthcoming, they were moved to Kyindu

Ranch in 2012, where they have multiplied to more than 500 now. I was curious

now to see what had changed since, and went to visit the park on the first Sunday

My visit proved to be very interesting. The Park was quite busy, as many Lusaka

residents had had the same Sunday-outing idea that we had. Asian and Chinese

families had come for picnics, azungu for game-viewing, and there was a Zambian

couple searching for rhinos in the bush. No one had told them that the two rhinos

were in an enclosure near the Park’s headquarters .

In two hours of driving around we only saw one impala and one sable antelope.

about and which were on the ‘ List of Lusaka Park Animals’ , given to us at the

The main roads are well graded, especially the Central Road, while loop-roads still

had protruding rocks that required cars with high clearance. Access to the park

from Leopard’s Hill Rd is well signposted; inside the park it could be better. I

Getting a map together with the official, proper, handwritten ZAWA Entry Permit

would be nice, and putting a billboard at the entrance showing the park’s road

network could be helpful. As it is, the scout collecting the fees, when asked, will

unroll a large map to show the park’s lay-out.

The ZAWA HQ behind which the rhino enclosure is hidden, is not signposted at all.

It could benefit from a ‘rhinos this way’ arrow. The picnic site is spacious, with

shelters, tables and chairs, braai facilities, and viewing platforms (a low one with

stairs leading up to it, and a high one with a wobbly, wide-rung ladder that’s an

accident waiting to happen), and of course an ablution block. Will this be the

camping place that the President talked about? 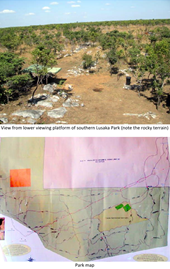 In short, Lusaka Park is perfectly fine for a family outing or a Sunday picnic, but to

the outskirts of town, or drive the mere three hours to Kafue Park (or fly for one-

hour on the recently establish KNP Proflight route to Busanga, Chunga or Lufupa).

For those who cannot recall the 19 other Zambian national parks, here they are:

A. The popular ones, i.e. those accessible to tourists:

B. All others are fairly defunct, i.e. unmaintained and depleted of game:

and maybe (though it’s not usually counted), the new -ish Sioma-Ngonye Falls Park

And now we have