And the Carnival is Over

AND THE CARNIVAL IS OVER – FOR THIS YEAR

The classic song by the Seekers from 1968 came to mind when the Notting Hill Carnival Road Show Company once again had the cat whistles in the air and screams of approval fill the streets of Victoria, being the last highlight and the last in fact to close the carnival juggernaut this year. That song And the Carnival is Over started playing in my head just as soon as the Seychelles Red Cross Society’s First Aid float had passed and the streets behind the parade filled with people again.

Bigger and Better they had promised and it was a promise well kept as even the normally subdued VIP tent occupants were regularly on their feet as float by float drove by and the groups performed their dances and thrilling shows in front of President James Alix Michel, his family and invited guests which included President Didier Robert from La Reunion, Vice President Foure, former Seychelles President Sir James Mancham, members of the Seychelles cabinet, members of the Diplomatic Corps and the who is who in Seychelles society.

20 floats put together by groups from abroad, spanning the globe from Brazil to China, the United States to Russia (with love no doubt), from Bali to Zimbabwe and from India to Italy to name but a few. 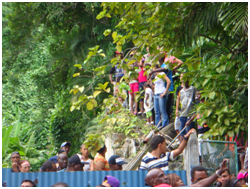 (Anywhere will do to get a glimpse of the thrilling action)

The streets were lined with Seychellois and foreign visitors standing several deep on the sidewalks and those with the wish to see better, they found vantage points on rocks and trees, peeping over perimeter walls and out from behind fences to be sure they did not miss a single beat, as the parade made its way through the centre of Victoria.

Going by the reaction of the crowd the top three floats and performing groups will come from Brazil, Mauritius and Notting Hill, though the judges may be good for another surprise yet as especially the local floats showed immense improvements compared to past years and the dance routines were visibly improved and well rehearsed, as carnival experience took root. Colourful costume creations, well chosen music and of course dance routines and performances showed that the Carnaval de Carnivals, the Carnival International de Victoria, has come of age with the third edition and is here to stay, becoming a magnet for all carnival nations and carnivalists from around the world wanting to participate in Africa’s number one carnival show which brings everyone together regardless, as Minister St. Ange said in his launch address, of religion, politics, race and creed. The world was united in Victoria as in particular the participation of Zimbabwe as a co-host showed, affirming the Seychelles’ general policy of being in good terms with everyone, and better, being friends with everyone who wants to be a friend.

Notably did two navy units, from India and Russia, take part performing a traditional march past, the Russians with their goose step routine stealing the show. The two units were coming from their naval ships on visit to Victoria port for some well deserved R&R from their duty with the international coalition against ocean terror by Somali pirates. They go plenty of applause and for a good reason as the people of the Seychelles know their friends who help keeping them safe and appreciate them, no matter from where in the world they came from to extend a helping hand.

The ‘mastermind’ of the event, now Tourism and Culture Minister Alain St. Ange could not conceal his broad smiles, and neither could the team around Elsia Grandcourt, Chief Executive of the Seychelles Tourism Board, when the show was over, the rainclouds had remained zipped up throughout the parade and they had been complimented by President Michel and those assembled outside the Ministry building, where the VIP tents had been put up.

‘And next year it will be bigger and better and more global again as you will see’ was his instant comment when asked how he felt about this year’s performance.

A separate interview with Minister St. Ange will be published here in due course but for now congratulations are in order to everyone involved in making the Carnaval de Carnivals such a roaring success, especially those often overlooked enthusiastic individuals from the Seychelles Tourism Board and their countless colleagues from the hospitality and tourism sector, the Seychelles police force who behaved at their Sunday best and were a credit to the country, the Red Cross and all the volunteers. Thank you for the splendid hospitality, the opportunity to see behind the scenes and the open access to all and sundry once again, showing the Seychelles have nothing to hide. Until next year for Carnival 2014 when we shall meet again.