As the second edition of the Bahrain International Air Show closed its doors, or rather the skies over the Sakhir Air Base, the organizers Bahrains Civil Aviation Affairs and main sponsors Gulf Air and BATELCO in conjunction with Farnborough International, are already talking of the next event in 2014. It will be bigger and better without losing our strength here in Bahrain said one of the key staff, before continuing which is being compact and very userfriendly and a show of short access to all points. Transactions made at the Bahrain Air Show 2012, while no final figures were available at the time of going to press, were expected to match if not slightly exceed those of the first show two years ago, an encouraging sign considering the wobbles the global economy is undergoing at present.
The sentiments expressed were also echoed by a wide cross section of professional show attendees, heard in the shuttle busses and at the watering holes time and again, It was also the impression of this correspondent who enjoyed being able to walk from the press centre at the entrance to one end of the displayed aircraft and then to the other within half an hour, at brisk pace admittedly, while being able to access literally each and every aircraft on show, except for the A380 of Emirates, which had been made off limits for security reasons, having had Sheikh Mohammad Bin Rashid Al Maktoum and his delegation on board for both the inbound and outbound flight, therefore prompting his security detail to immediately putting a wide cordon around the plane after they had disembarked.

Apart from that single setback though were other planes, dedicated corporate jets, cargo aircraft, Gulf Airs new A 320 or Qatar Airways dual class B777 open for business, as were all the helicopters, the smaller twin jets, turboprops, conventional piston engined planes and of course a range of military aircraft both fixed wing and rotary. 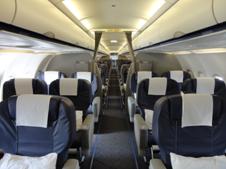 (Qatar Airways 2x2x2 flat bed business class seat in the B777, catering set up for those keen to try it out and then in comparison the 3x3x3 economy class seats, one seat less per row in each cabin compared to other airlines.)

(The interior of a private corporate jet on the platform of an A320, sitting room, bedroom convertible to a private office, an elaborate bathroom with shower-cabin and the First Class section behind which is an economy class section for such staff not having the ranking yet to sit up front.)

Meanwhile were talks confirmed by Sukhoi with Bahrain Air, to sell anywhere between 3 to 5 of their SSJ 100, aka Superjet for its apparently astonishing flight economics which could give the Russian manufacturer a crucial foot in the door in the Gulfs booming aviation market. That sale, if pen it put on paper, would add to the sale of 5 of Bombardiers new CSeries, plus 5 more options, to Switzerlands PrivateAir and would lift the transaction value of BIAS2012 substantially.

Great for the tens of thousands of ordinary spectators though was the array of military aircraft and the opportunity to sit in a Black Hawk or walk into a C17, take a combat flying lesson in the simulator of an F18 Super Hornet or look down the gunsights of a Cobra helicopter gunship, and then seeing the fighters and interceptors perform stunning acrobatics overhead. Many also took advantage of a vertical wind tunnel set up where free fall parachuting could be experienced, wind in face and all, but of course properly suited up, and queues during the peak hours were evidence enough of how popular this show item had become.

(Sukhoi S27 Interceptors, flown by the Russian Knights, on the ground and in the air)

(And engines, big and smaller starting from an A320, seen from both from back and front, over the C17 and then finally of an A380, the largest commercial passenger aircraft engine on the market)

But there were fun aircraft too, like these twin seater GyroCopter shown below, which attracted lots of visitors and whenever possible did kids get seated in it, as did their dads too, bringing out their own child in them again. Perhaps this is todays answer to the growing traffic jams, although the absence of a cabin does make it quite windy and when it rains also quite wet of course.

With BIAS 2012 concluded Bahrain is setting the sights on BIAS 2014, which is according to the show organizers expected to grow, bringing in more aircraft and more exhibitors, extending the VIP Suites or as here called chalets by a few, as this year had sold out early leaving pending demand unsatisfied for late comers, and crucially for show visitors offering even more special attractions for them to enjoy the thrills.
And in closing, a special thank you to Gulf Air and Chief Services Officer Marcus Bernhardt and his team in corporate communications, who made this flying visit to the Kingdom of Bahrain possible. Visit the shows official website www.bahraininternationalairshow.com for more information and www.gulfair.com the airline with the largest network in the Middle East.