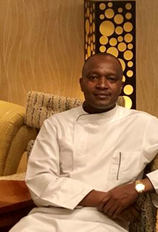 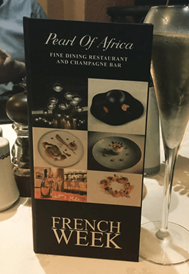 Food Festivals and Food Weeks have in recent years become increasingly popular in Kampala as the level of sophistication by diners has advanced, not quite yet matching the culinary scene in Nairobi overall but definitely getting there.
The ‘Gout de France‘ event celebrates French cuisine and Belgium, Germany, Italy and other Mediterranean countries, including Lebanon and even Cuba have made appearances at Kampala’s leading hotels and restaurants to showcase and celebrate their food and culture.
Alongside the #GoutdeFrance event did the Kampala Serena Hotel organize a French Week with visiting Michelin star rated chef Julien Lucas in mid March.
The week, sold out for every lunch and dinner, was a huge success, but the true mettle of the kitchen brigade only shows when the fancied foreign chef team has left again and our own chefs have taken charge again.

I felt that three weeks down the line from the launch of the fancied French Week was sufficient time to sample the food, and while the Pearl of Africa Restaurant has of course returned to its ‘regular‘ menu, both Table D’Hote and the broader selection of dishes, did I challenge the chef to replicate the French Week presentation.
Chef Eshton Muthai, on arrival in Uganda more than a decade ago, was already then a star pupil of Serena’s (then) Group Executive Chef Macharia, himself a wizard with spoons and pots in the kitchen.
Eshton kept the tradition of up and coming Serena chefs, underwent additional exposure abroad where he was able to refine his techniques and chef skills and when eventually elevated to the position of Executive Chef at the Kampala Serena Hotel – Kampala’s only member of the Leading Hotels of the World – he put his own markers down.
The Pearl of Africa Restaurant was in the past repeatedly voted as Kampala’s best fine dining venue and together with the hotel’s other restaurants, The Lakes and The Explorer – the latter with a clear Italian bias – is a favourite locations for Kampala’s Captains of Industry and socialites keen on quality food and attentive service.
The long Easter weekend gave me the excuse to enjoy a ‘Staycation‘ at the Kampala Serena Hotel and the opportunity to put my culinary plans into action.

Chef Eshton was prompt to make an appearance at my table, when the order for the French Week menu arrived in his kitchen, smiling confidently when he assured me that I would not be disappointed and then challenged me to sample the entire menu in one sitting, having all the courses and making me rue to have taken lunch and not prepped myself to arrive with pangs of hunger.

The courses began to arrive, and true to to Eshton’s form – and that of his kitchen brigade – were nothing less than superbly excellent.

I started off with the Light Beef Jelly, topped with caviar.
The pictures only show the dishes as they were served, not the plates well near licked clean afterwards, to avoid giving ammunition to those who may think that this sort of overindulgence was bordering the sinful … 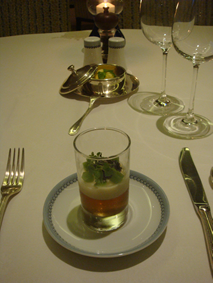 The second option of a starter, served as soon as the plates were cleared, then was Roasted Foie Gras, served with mashed turnip and a daikon pickle, and that truly set my taste buds alight. I am a great fan of Pate and hence now the good stuff from the not so good, but this truly was right on top of the scale of any Foie Gras I ever ate. 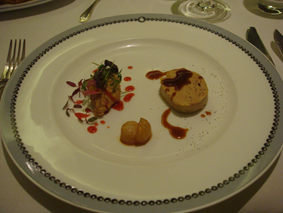 The next two courses were then all ‘fishy’, with Scallops being served as an intermediate course and licking the plate clean was a tempting thought, resisted of course given the public setting and the demand for good dining manners, though I am almost sure that, had the meal been served by room service, the outcome would have been different. 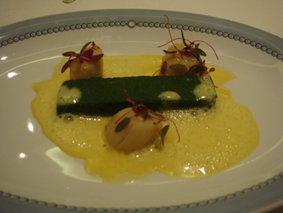 Sea Bas served with La Brie Lentils certainly then was a combination I had never tried before. I often make a red lentil dish on weekends, an almost classic recipe from the old country but here had the hobby cook – note, not chef – yield to the professional, so well prepared was this entire dish, leave alone the taste …
The fish was moist in the middle, perfectly cooked the way a fish dish should be presented, an unusual but nearly perfect match for the lentil of which I left not one on the plate. 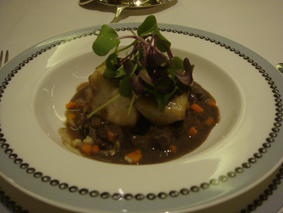 If I thought I might escape my fate and be spared the second main dish of the French Week, Pan Seared Veal, I was sadly mistaken. Chef Esthon made sure I had to hold up the end of my bargain and eat my way through the entire menu, and eat I did, thankfully helped by the veal literally melting on my tongue, so soft, moist and tender it was. 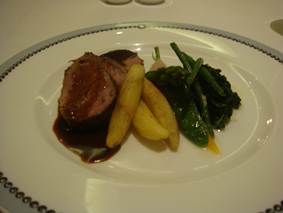 As once upon a time taught by my maternal grandmother, what comes on a plate must be eaten, veggies and all and I am sure I made her proud as there was not a shred of anything left on the plate and little evidence of the ‘jus’ which I was tempted to ask for more to drown my food and empty the little jug – why, because of its divine taste. 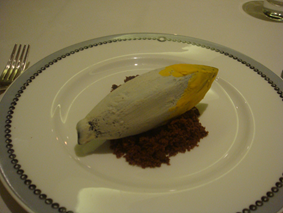 And then came the ‘Piece de Resistance‘, something so chocolatey that I could not refuse even with the fullest of stomachs, as chocolate is my comfort food and my regular companion when I travel, rarely with someone in tow but never without my chocolate in the hand baggage.

The imitation of a piece of chicory, all made of chocolate and then given the right appearance, also with chocolate, proved to be my penultimate challenge and given the filling required every ounce of energy I had left to also finish this dish.

Thankfully had Chef Esthon then mercy upon me and not made me eat the alternate dessert, which would have been Tangerine with Pistachio Cream.
I had met his challenge as he had met mine and the food was prepared entirely by a kitchen team of made up of East Africans.
It went on to prove the point made at the beginning that we in Uganda have what it takes to produce excellent food, made of ingredients both local and foreign and fused to perfection.

When I look at the next generation of Ugandan chefs at the Kampala Serena Hotel, like Chef Peace and Chef Christine – the latter famous for meeting my #EggBenedictChallenge time and again with a 10 out of 10 – I know that Uganda has arrived not just as one of the world’s greatest adventure destinations but also for the hospitality offerings and the food visitors can enjoy. 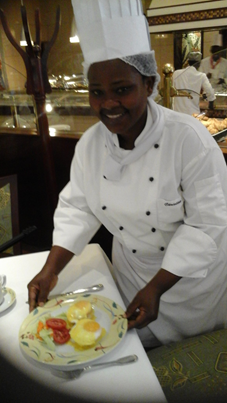 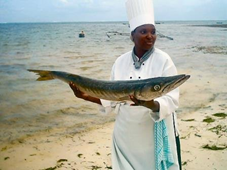 Like Loading...
PrevPreviousThe #Fisayo tells of more things about herself and life in #Lagos #Nigeria
NextThe End of the Great War – #Kenya RemembersNext