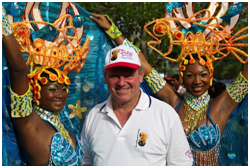 NOTTING HILL MAKES IT THREE IN A ROW

(Seychelles’ Minister of Tourism and Culture Alain St. Ange seen with some of the performers)

It came as no surprise that the three top foreign teams competing for the honours of claiming first prize in the just concluded Carnaval de Carnivals, the Carnival International de Victoria 2013, came from among Brazil, Mauritius and Notting Hill in the UK, which thrilled the crowds already during the opening show and then again when the parade juggernaut rocked and rolled through the centre of Victoria.

But it was the Notting Hill Carnival Road Show which again claimed top honours and claimed the trophy for best foreign float and performers, a fair verdict in the eyes of this correspondent who himself found his feet tapping to their tunes, eyes glued on their dance moves as they paraded by the media section outside the Ministry of Tourism and Culture last Saturday afternoon.

Claire Holder of the Notting Hill Carnival Group was awarded with a gold trophy sculpted by the famous Tom Bowers of the Seychelles. The prize giving ceremony award was presided over by Alain St.Ange, the Seychelles Minister for Tourism and Culture. The award presentation ceremony followed the Notting Hill Carnival Roads Show Company vibrant performance at the carnival parade where public comments remained unanimous that the performance by Notting Hill was even more impressive this year than in previous years.

Coming all the way from United Kingdom, this year’s Notting Hill Carnival Road Show came in full swing, jamming the streets of Victoria overcoming Mauritius, who came out in second position and Brazilian group, Rosa de Outro, which took the third position.

Mauritius beat the fancied Brazilians to claim second place and the Minister then released the following statement in which he said: ‘The Mauritian delegation has impressed the Seychellois public and all who attended the 2013 edition of the Carnaval International de Victoria.This is the first participation by Mauritius at the Indian Ocean Vanilla Islands Carnival that is staged annually in Seychelles’.

Mauritius was parading alongside their sister islands of Seychelles, La Reunion and Madagascar with delegations from the Community of Nations. Mauritius went to Seychelles with Ms Shenaz Omarjee of the MTPA as the head of their delegation. They travelled to Seychelles and in so doing showcase the people of Mauritius, the island’s culture and the unique selling points of Mauritius with the slogan ‘Maurice c’est un plaisir’ displayed on a big display balloon on a truck following the delegation in the carnival parade.

‘Mauritius participated with a sea life theme and they captured the attention of all who were in Victoria to watch the carnival parade last Saturday. The segatier were all enthusiastic and the Mauritian ladies in the parade beautifully dressed in a sea motif elegant dress. They did Mauritius proud’.

The Mauritius carnival group presented a perfect mix between Sega and Samba and already during the opening show on Friday evening last week served notice of their intent to go home with silverware, as they got the crowd on their feet with a thrilling performance, then repeated as they paraded through Victoria. Well done indeed and surely, with this success under their belt, Mauritius will be a regular in future events and not come on board as a participant at the very last moment as was the case this year.