21st Century brand: New oneworld market positioning unveiled that is fresh, contemporary and more inclusive, reflecting the diversity of the alliance’s member airlines and their customers, with the tagline “Travel Bright” – and including a new website. The CEOs of oneworld® member airlines today met in London to unveil a radical transformation of the global alliance as it marks the 20th anniversary of its launch.

The moves are designed to increase the value that oneworld delivers to customers and to its member airlines into its third decade, while reflecting the substantial changes in the marketplace and the industry since oneworld originally took off on 1 February 1999.

• A new oneworld digital platform that will, as it is progressively rolled out, bring to life in the digital era the alliance’s core promise of seamless connectivity for customers flying on multi-sector, multi-airline journeys, via the convenience of their preferred member airline’s mobile app or website – without having to download any additional app or enter more log-in credentials.

• An increased level of alliance co-location projects at a number of key airports around the world – with plans to unveil the first oneworld branded, developed and managed lounge later this year.

• A fresh approach to corporate sales, enabling oneworld to respond much faster to requests for alliance contracts, which currently generate US$ 1 billion a year for member airlines. Since trials of the new process began six months ago, revenues have risen 10 per cent. Dozens of the world’s biggest multinational corporations have signed corporate accounts with the alliance rather than a series of individual airline deals.

• A revised process for prospecting potential new members. The first airline to join as a result will be Royal Air Maroc, next year – oneworld’s first full member recruit for six years and its first from Africa.

• The alliance’s first new membership platform, oneworld connect – designed with smaller, regional airlines in mind – with Fiji Airways’ entry as the first oneworld connect partner to be completed by the end of next month. Talks are progressing with other airlines interested in signing, from the Americas, Europe and Asia-Pacific, enabling the alliance to spread its wings still further globally.

These changes are reflected in a sweepingly different brand positioning for oneworld, encouraging passengers to “Travel Bright” – complete with a new oneworld.com website, both unveiled today.

What the CEOs say

oneworld CEO Rob Gurney said: “In the two decades since oneworld was launched, the industry and consumer behaviours have changed fundamentally. Most of our member airlines have undergone comprehensive restructuring. Some have merged. When oneworld first took off, hardly any airline offered online bookings. Smartphones were in the future. Social media did not exist. Airline fares included everything. Low-cost carriers were in their infancy. Since then, global alliances have grown greatly in terms of membership but, to be frank, they have failed to keep pace with the changes that their members, the industry at large and the marketplace have experienced. At oneworld, we are making up for that. As we enter our third decade, we are undergoing a radical transformation, with a host of fresh initiatives to strengthen further the relevance of the alliance to our member airlines and our customers.”

oneworld Governing Board Chairman and Qantas Group CEO Alan Joyce added: “Qantas was one of the airlines that founded oneworld 20 years ago and we’ve seen it evolve into the leading alliance in the sky. In some ways, oneworld represents a team of rivals, given several members are direct competitors in various regions. For two decades it’s been able to bring together the best carriers, lounges, frequent flyer programs and networks offer people a much smoother travel experience. Now, as the alliance enters its third decade, we are stepping up that cooperation and modernising how we work together to make oneworld even more relevant to international travellers and to its member airlines.”

Rob Gurney and Alan Joyce were joined at the London event today by their counterparts from oneworld’s other three founding members, who commented on behalf of colleagues from many of the other airlines that have joined them in the alliance since then, who were also present.

American Airlines Chairman and CEO Doug Parker noted: “As oneworld celebrates its 20th anniversary, we are very pleased with how the alliance is positioned – both today and for the future. Together, oneworld member airlines have a footprint that is far larger than American could ever have on its own. This additional connectivity is tremendously valuable to our customers and our team members and it is important for our business. We are excited about the future of oneworld and our continued partnership with some of the leading airlines in the world.”

Alex Cruz, British Airways’ Chairman and CEO, said: “British Airways hosted fellow founding oneworld members in London when we launched the alliance two decades ago and it is an honour to welcome this greatly expanded family back to our home city in our own centenary year to celebrate our alliance’s 20th anniversary. Global alliances need to evolve to remain relevant in this fast changing industry – and that is just what oneworld is doing now.”

Cathay Pacific CEO Rupert Hogg remarked: “Cathay Pacific was proud to play our part in founding oneworld 20 years ago and establishing it as the leading quality alliance. And we are proud today to be playing our part again in transforming the alliance, moving forward to deliver more benefits both for our customers and our fellow member airlines as the alliance flies into its third decade and beyond.”

Royal Air Maroc was invited into the alliance in December and is on track to join during 2020. Around 30 airlines linked to the alliance’s full members are oneworld affiliate members, offering its full range of services and benefits. Fiji Airways was introduced as the first oneworld connect partner in December 2018, offering a subset of the alliance’s services and benefits, and is on track for full implementation next month. Collectively, these airlines now:

Since oneworld was launched its members have boarded a total of 7 billion customers – equivalent to today’s entire global population. See 20 years, 20 facts, oneworld.

oneworld member airlines work together to deliver consistently a superior, seamless travel experience, with special privileges and rewards for frequent flyers, including earning and redeeming miles and points across the entire alliance network. Top tier cardholders (Emerald and Sapphire) enjoy access to more than 650 airport lounges and are offered extra baggage allowances. The most regular travelers (Emerald) can also use fast track security lanes at select airports. 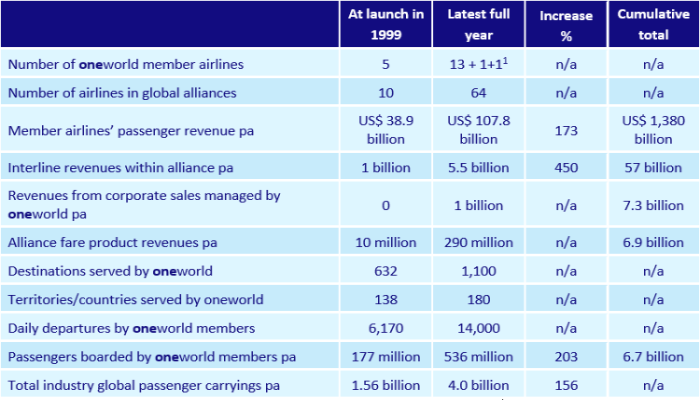