‘Just how serious are the authorities in this country? Here we go celebrate that Diani has been voted among the top beaches in the world and there the same beaches face total destruction because of the greed of a few who are stealing our sand’ ranted a clearly enraged source from the South coast of Mombasa when passing additional information that the notorious dredger was back in action after dark over the past days.

Prompt out of the blocks was once again the South Coast Residents Association, which brings together individuals as well as businesses, alerting their members to be on the lookout for renewed dredging at night off the beaches of Mwisho Ya Lami where during the past few nights ongoing dredging could be heard and the navigation lights of the vessels seen not far behind the reef.

Excerpts of mails received from and to the SCRA Chairperson (with due permission to reproduce them here) go to show just how destructive the impact of sucking the sand from the ocean floor just outside the reef is on the beaches, besides the killer effect it has on marine life.

‘You will recall the saga of the Chinese dredger/sandharvester along our beaches in October last year and the workshop which followed. To refresh your memories, please see this link:

As predicted at the Workshop, the impacts of sandharvesting in the ocean are many from destroying our reefs, fishing for local fishermen, scuba diving and snorkeling areas, killing of the mangroves, etc., AND DESTRUCTION OF OUR BEACHES, as the tides gradually take the sand from the beaches and return it to the sand harvested areas. We are now beginning to see this happening from Tiwi up to Diani along the areas the dredger was at – see photos attached.

In the latest Trip Advisory we read: Kenya still got what it takes as Diani Beach is among TripAdvisor’s top 25 beaches

BUT for how much longer?

We managed to stop the dredger BUT will it come back? And what is going to happen in Tiwi when the Japanese harvest sand for KPA. SCRA has been in touch with both KPA and Kenya Maritime, but we are unable to get concrete answers and unable to find out who is actually doing the EIA. Can anybody help on this?’

Other mails show similar concern and the photos are self-explanatory just how immediate and how massive the impact on the affected beaches is.

‘Dear all! At Nomad we have lost 2 feet depth of sand. Although this sounds not a lot it is a huge volume gone’

‘Further to my email of yesterday, it may appear that the dredger is back but now operating at night. Several members have heard this at night, and last night by the sound of the noise it was making it was at the Mwisho Ya Lami beach (Maepe). It started at about 8p.m. and continued until about midnight. I could clearly see the ship’s lights not very far from the reef. Could someone in authority please get information from Kenya Navy who have a base in Diani and have radar or from KPA – this kind of information will not be given to us.’

A long time Diani resident, who while no longer in the frontline of tourism operations, was unequivocally saying that unless measures are taken to halt dredging along the South coast beaches once and for all, could one of Kenya’s greatest tourism resources be damaged beyond repair and turn from a crowd puller and award winner in the space of a few months into a marine desert landscape. 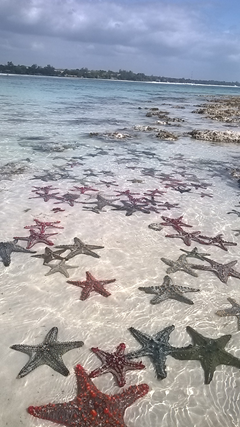 This is what tourists presently find when they stroll down the beaches and during low tide wade out towards the reef, or else use a glass bottom boat to explore the marine life off the Diani beaches. The next picture below shows what, if the sand harvesting is not stopped, the same beaches could look like in a matter of months and it is clearly everyone’s guess how this will impact on tourism, occupancies in the resorts and the impact on the South coast economy when the tourists then post such pictures on the social media. 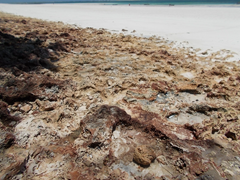 Apart from all other challenges Kenya’s coast tourism presently faces, this is yet another threat which needs to be dealt with decisively and swiftly.

I know that there are some who will be prompt in claiming that this is just another article full of negativity about Kenya but the truth is that unless this is exposed in a wider arena, and support generated not just from within the country but from international organisations and bodies raising their voices and throwing their weight behind this campaign, this might be a battle lost. The powers that be in Kenya appear clearly hell bent to ride roughshod over environmental concerns to build the Standard Gauge Railway and new harbours – and no one is suggesting that this should be delayed or worse, halted – but ways and means have to be found to get building materials like sand from elsewhere and not condemn Kenya’s prized beaches to a slow death.

To make matters worse, sea sand needs to be washed with fresh water, an equally scarce resource at the coast and if millions of tons of salty sand have to undergo such treatment, it is again everyone’s guess whose water pipes will go dry while the ‘washing’ goes on. Questions galore and it can only be hoped that common sense prevails and the sand harvesting is now truly once and for all stopped.

Like Loading...
PrevPreviousYes, choices do have consequences and the time to make better ones is now
NextSouth Sudan – too lawless to visit or an opportunity not to be missed?Next