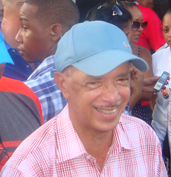 With the next presidential elections now just under a year away have former Parti Lepep members thrown the gauntlet at President Michel when, after weeks of rumours and speculation, they broke away from the ruling party to set up their own, named ‘Lalyans Seselwa’ or Seychellois Alliance.

Former president Albert Rene, who handed over power peacefully to his then Vice President James Alix Michel in 2004, immediately denounced the move and called the breakaway faction ‘traitors’ leaving it open to speculation how he would have dealt with them if this had happened while he was in power.

Many of the changes the Seychelles’ experienced in particular since the global financial and economic crisis of 2007/2008 have taken place under President Michel’s government. It is clear that he opened up spaces for all Seychellois to become economically empowered and while his decision to follow the IMF dictates in 2008, led to a temporary run on the Seychelles’Rupee, has the currency since then clawed its way back. Today is the economic position of the Seychelles stronger than ever before largely driven by a vibrant tourism industry.

It is also credited to President Michel that the naval coalition took more determined measures to wipe out the Somali ocean terrorists after the Seychelles’ were the first to stage successful rescue missions in which the navy and coast guard engaged the terrorist at sea. Recommendations at the time to have armed protection on ships was also promoted by the then Minister of Internal Affairs Joel Morgan, and an interview at the time outlined the country’s broad range of measures put into place to counter a clear and present danger to the economic interests of the archipelago nation which depends on open sea lanes.

The capital Victoria was awash in rumours on carnival parade day when the president did not show up and security threats were cited as a reason for that but James Alix Michel nipped the saga in the bud when he showed up at the closing ceremony of the 2015 Carnival and addressed the massive crowd gathered on the Freedom Square showground.

Only a few weeks ago did President Michel affirm his intention to run for another term of office, to which under the present constitution he is entitled, and also confirmed the present Vice President Faure as his running mate for the next elections. Those must be held within three months after the end of January next year but it is within the presidential powers to call a snap election, which is now looming as a real possibility before the breakaway faction can get properly organized.

Notably is among the new party tsars the former chairman of the Seychelles National Chamber of Commerce and Industry Dr. Ramadoss, former ministers Patrick Pillay and William Herminie and Ahmed Afif, who has fought a long running battle with the Seychelles Civil Aviation Authority to have a private airline registered under the name of Seychelles Airways but was stopped by the Registrar of Companies and told to use a different name if the venture was to go ahead.

Whether the leaders and followers of the new breakaway party have acted out of grudges, spite or personal ambition, feedback from Seychellois spoke to was largely united that whatever their motives were they are now outcasts from the majority of the ruling Parti Lepep and will face an icy wind in their faces from here on.

The more regular opposition parties SNP and SUP have in the wake of this development also confirmed that they will participate in the next presidential elections even though key party leaders were glaringly absent when the last election results were announced and made various claims about election interference, all rubbished at the time by the AU and Commonwealth Election Observer missions.

What was clear over the weekend though is that Seychellois were not affected in their desire to celebrate the Carnival International de Victoria and party into the wee hours of Friday to Saturday night and Saturday to Sunday night when the opening gala and the parade were over.

Prior to this development was it all but clear that President Michel would comfortably win his re-election bid and he will no doubt equally deal with this new kid on the block too after effectively whitewashing the opposition at the last parliamentary elections when only one opposition member made it to the house, in part because the other opposition parties withdrew from the election to the disappointment of their followers, allowing Parti Lepep to sweep the board.

Tourism sources have expressed their confidence that political developments of this nature will not affect tourism and that when the election campaign starts it will, as in the past, remain peaceful and orderly. As the saying goes, do watch this space for future updates on this brand hot island topic.