Wildlife versus trucks, the stark reality of paved roads in game rich areas 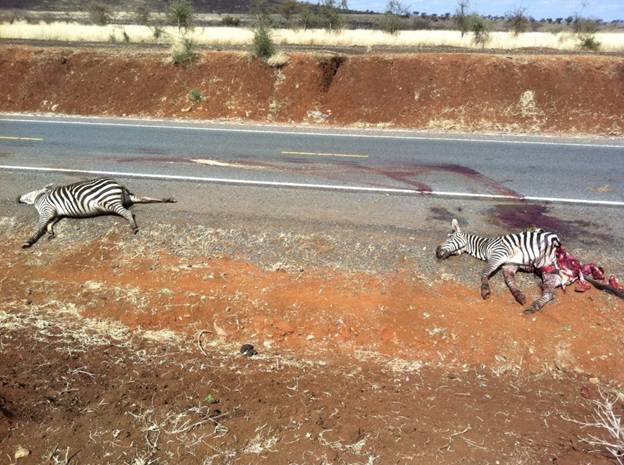 GAME VS TRAFFIC LESSONS OF THE NEW KIMANA ROAD FOR THE SERENGETI HIGHWAY
In the absence of a clear commitment by the Tanzanian government, NOT to build either the controversial highway, paved or unpaved, across the key migration routes of the Serengeti, nor route the planned railway to Musoma across the same corridor, must now parallels be drawn of experiences in neighbouring Kenya, where the new road from Emali to Kimana is causing a sharp increase in animal deaths.
Only yesterday were my Facebook pages swamped with the gruesome images of two killed zebras, both reportedly knocked over by a speeding truck, now that the road along this game rich area has been paved and, unlike in the old days when a mud track made vehicles to crawl along at snails speed if not getting stuck altogether, cars today can move with high speeds.
Previously on the same road were hyenas killed as well as at least one known case of a young lion, as were gazelles, foxes and smaller wild cats.

The new road, leading to Kimana, the outpost of the Amboseli National Park with its own swamps, wetlands and subsequently rich in wild animals, crosses a migration corridor used by game since time immemorial to move and find pastures. From Amboseli and its greater ecosystem all the way to the Chyulu Hills, which national park adjoins the greater Tsavo area, tourists often see zebras and plains game, at times giraffes even, while still a considerable distance away from the park itself. Increased traffic and higher speeds however have of late resulted in a number of game related accidents. It is in particular trucks which have been reported to plough into game which was either attempting to cross the road or even just stood on the road, clearly oblivious of the threats of modern day life posed to them by the onslaught of traffic and the drivers rather going through the animals than applying emergency breaking and risking to slide off, overturn and lose both truck and cargo in the process.
There have always been accidents along the Mombasa to Nairobi highways, as it passes through the Tsavo ecosystem and beyond until the Chyulu hills have been well left behind, and my first experiences way back in the 1970s, when regularly travelling on this road, reminds me of the need for extreme caution, as often, in particular at night when harder to spot, elephant, zebras, impalas and gazelles would suddenly appear in the spotlights of my car, causing the brakes to be slammed, evasive action to be taken and then uttering unprintable words when escaping with a whisker and by the proverbial inch to spare.
The railway running in parts in parallel with the highway has had its share of game related incidents, and with the large volumes of traffic of course on the main highway from the coast to the capital, hundreds of road accidents have happened over the decades, caused by game crossing from one side to the other. The new road from Emali to Kimana, which branches off there to either go on straight to Loitokitok and the Tanzania border or towards Amboseli on one side and the Tsavo West main route on the other, is however a good example of what negative impact it can have on wildlife.
The sudden rise in accidents and game deaths is there for all to see and with the new media making the transmission of a snap shot literally instant the fallout of such incidents can be documented and spread with ease to a wide audience, which previously would never have known a thing about it.
What lesson to draw here about the lunatic plans to build, going by the version of the Tanzanian government, an unpaved highway across a crucial migration route, as believable or not as that may be? For one, that accidents between relatively fast moving trucks, regularly not bothered by speed limits, and wildlife would shoot up significantly, causing loss of wildlife, perhaps loss of human life too, for sure being costly for the owners of the trucks and busses and saloon cars involved and here the problem suddenly magnifies.
Once THAT element comes into the equation, road users will no doubt start to demand that government has to do something about that wildlife menace in particular if ever, and God forbid that it does happen, a fully loaded bus rams into a herd of animals, overturns and scores of passengers would be killed.
Understandably there would be an outcry, blame would have to be assigned and for sure not to those who committed the folly of building a road here in the first place but towards the killer animals. Worse, coming with that would those secretly plotting to have the highway paved after all, have their excuse to finally move to the next stage, which could be fencing crucial sections off so that such tragic accidents can be avoided in the future I guess the choice of words then might be a mirror image of what I just wrote.
I think readers will get the drift here and it is hoped that the conservation fraternity, when discussing the proposed Serengeti Highway, will factor in such latest developments as they now turn into tangible statistics on the Kenya side, that traffic and wildlife, such so called developments and conservation, simply cannot be bedfellows and cannot coexist, without one being run over, literally. And going by conventional wisdom, that would be the conservation part of it, not the traffic nor the vague development projected to unsuspecting populations by greedy politicians who see a get rich quick scheme in all such projects instead of putting nature, and the nations long term future, first. Watch this space.