The political change in Zimbabwe has promptly translated into increased interest to visit the country and rising tourist numbers over the first half of the year.
In addition has the new Victoria Falls airport has proved to be a positive development for the resort town and the destination at large. The evidence of increased business has been more pronounced with the airport’s capacity utilization rising from 21 to 26 percent in the first half of the year according to the Civil Aviation Authority of Zimbabwe (CAAZ). Arrivals at the airport also rose by 31% from 39 751 to 52 248 in the same period. However, the full potential of the airport is yet to be realized. There is still work to be done for the destination to get a higher return on this investment. These include the need for uplift (airline catering) facilities, a situation which currently poses challenges for long haul airlines to operate. There is also need for the airport to have cargo warehousing facilities and to upgrade the airport category to cater for wide bodied aircraft (fire cover). The airport needs to ensure availability of modern passenger handling facilities and services.
At a policy level there is need to allow more airlines to ply both domestic and international routes in Zimbabwe. The same challenges can also be mentioned for the Joshua Mqabuko Nkomo Airport in Bulawayo.
In addition, the foreign currency shortages continue to affect operation in the industry. For example airlines are failing to remit their funds and this might force some airlines to pull out. Due to limited connectivity by air the geographical spread of tourists is largely by roads and hence the need to further rehabilitate some of the key roads to national parks and national monuments like Great Zimbabwe.
Domestic investments into the sector have also began to increase again, aimed to raise both quality as well as capacity to absorb greater visitor numbers. 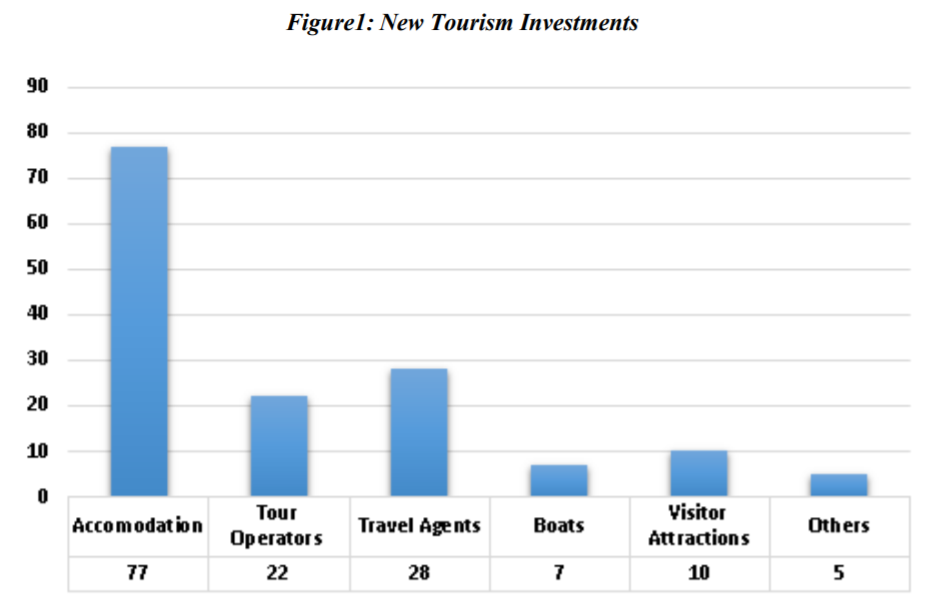 Europe
Arrivals from Europe rose by 29% to 101,101 from 78,225 in 2017 with increases in most major markets including UK (19%), France (34%) and Germany (15%). Of major note is Spain and Portugal which rose by 75% each. Europe, remains the largest overseas source region for the country with a market share of 9% which is second to Africa. More than half (59%) of all European arrivals were through the Victoria Falls region highlighting the growing contribution of the resort town to overseas arrivals into the country. Elsewhere in the region South Africa recorded 624,905 arrivals from Europe in the first half of the year representing a 2% fall from 784 120 to 767 050 in 2017.

Americas
The Americas had a 10% increase in arrivals in the first half of 2018. The region contributed 919,023 arrivals up from 878,775 in the first half of 2017. It is important to note that outbound travel from the United States had a slow growth estimated at 2%. All other major markets from the Americas increased with the greatest increase by 76% registered for Canada which rose to 6,455 from 3,664 in 2017.

Mainland Africa
Arrivals from mainland Africa were 919,023 from 878,775 representing a 5% increase despite a 34% decline in arrivals from South African. Considering that South Africa is Zimbabwe’s major source market from mainland Africa, there is great need to tackle the challenges that have caused this market to shrink year on year over the last decade. Issues like congestion on both sides of the Beitbridge border post and bad roads have remained outstanding for a long time and have contributed in choking self-drive tourists from this market. Currently 41% of the arrivals from the region are indirectly transiting through the country.

Generally all the regions of Zimbabwe experienced growth during the period under review with the exception of Masvingo.
Harare, Bulawayo and Victoria Falls maintain the largest share in terms of hotel room and bed capacity making 64% of the total room (6 483) and bed (12 772) capacities in the country. These three regions registered growth in occupancy levels in the first half of 2018. The national average hotel room occupancy level so far rose from 43% to 51% in 2018. It is important to note that the accommodation capacity has not increased over the last two decades. For instance currently Zimbabwe as a whole has a total hotel room capacity of 6 483 which is just 5% of the 119 700 hotel rooms for South Africa. In terms of destination competitiveness, this poses a challenge when it comes to biding for big events and conferences.

Harare registered an average hotel room occupancy rate of 64% up from 52% in 2018. For the second quarter of the year the region recorded its highest monthly average of 73% in June. This growth to some extent is an indicator of continued interest and business engagements which have been catalyzed by the new dispensation. Domestic business tourism continue to play a critical role in occupancy growth. The domestic clientele grew from 40% to 75% in 2018. MICE business especially meetings and conferences in the Harare region continues to hedge occupancy growth with some major hotel facilities hosting 603 meetings/conferences with a combined attendance of over 70 000 people during the period under review.

Victoria Falls has been performing exceptionally well with average occupancies above that of other regions in the country. Most of the hotels in the resort experienced high occupancies of around 80% during the review period. Only a few failed to surpass the 50% mark. Overall, the region experienced growth throughout the first half rising from 34% in January to 73% in June. Growth in occupancies was a result of international leisure tourists who constituted 76% of the clientele 12 composition of hotels in the resort town. Overall, the Average hotel room occupancy for the Victoria Falls region rose from 46% to 53% in 2018 (see Figure 3 below).

Hwange experienced a significant 14 percentage point increase in occupancies from 20% in 2017 to 34% in 2018. This was quite encouraging as tourism in the region had shrunk significantly in the past decade. However the occupancy rates for this region continue to be very low compared to the near-by Victoria Falls. This has stemmed from the competitive rates and product offered by Chobe.

Bulawayo region experienced a minimal average occupancy growth from 45% to 46% in the first half of 2018. According to operators in the region, patronage of hotel facilities in Bulawayo continues to be dominated by domestic tourists particularly those on MICE business. 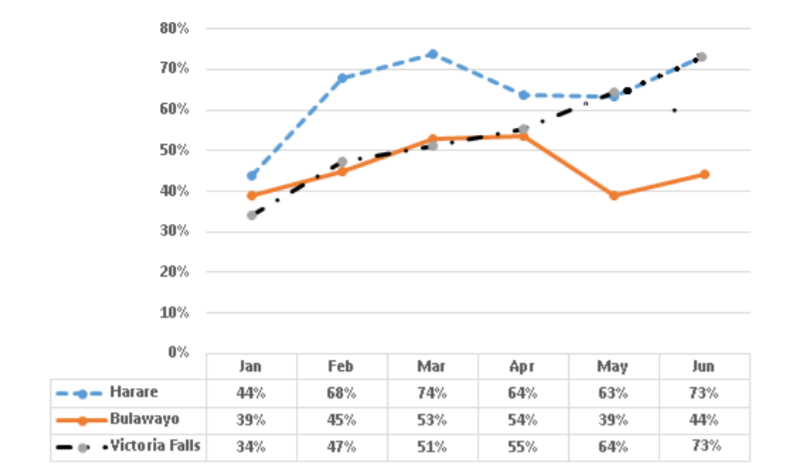 The Mutare/Vumba region experienced a significant growth in occupancies during the period under review. This impressive growth in occupancies was a result of sporting events such as the Tanganda Marathon which was held in June. This event usually attracts around 600 athletes, but was attended by over 1500 athletes in the first half of the year. Occupancies were also driven by competitive rates offered by the operators especially through online accommodation platforms which saw many operators offering discounted accommodation to as low as $20 per room. In the second quarter of the year the region had individual hotels which achieved average occupancy rates above 60%.

Nyanga region experienced an 8% growth in occupancies, this growth was driven by domestic tourism as seen from the clientele composition which grew from 75% in 2017 to 97% in 2018. This occupancy growth is also an indication of positive results from the current drive to promote and 15 develop domestic tourism in the country. New tourism products such as the Skywalk Bridge and Zip line in Nyanga have also impacted positively in rejuvenating tourism in this region.

With the current trends and forecasts positive prospects await the tourism sector. It is hoped that the country’s tourism performance will continue to grow based on the envisaged regional tourism growth trends (6.8% per annum), improved destination image and destination awareness.
In addition to these, economic recovery as well as service delivery improvements in the sector and its support services are also expected to further boost the growth. Tourist arrivals are expected to surpass 2.6 million and tourist receipts are estimated to reach $1 billion by the end of 2018.