Zip lining by SMAC Adventures – another first for the Seychelles

ZIP LINING BY SMAC ADVENTURES ANOTHER FIRST FOR THE SEYCHELLES

The Constance Ephelia Resort has now started to formally promote one of their new, and very unique, adventure activities, operated within the resort by South African adventure specialist Johan Cronjes SMAC, short for Specialized Multi Adventure Company, which in their own words is Where Paradise and Adventure Meet.
This is another first for the Seychelles, seeking to establish the destination as one of all seasons, for all tastes and budgets and now for adrenalin addicts too. Abseiling from some of the steep rock faces dominating the centre of the resorts 120+ hectares of land, rock climbing for kids, beginners and experts and now a system of 8 zip lines, starting from near the Ephelias Presidential Villa and ending near the companys office at the bottom of the mountain are offering a range of active outdoor adventures, which can be done with the family but also of course alone.
A thorough briefing ahead of any of the activities will give participants the dos and donts and for zip lining, once the harnesses have been strapped on tight, a short trial run will give novices the assurance that the adventure they are about to embark on is not just safe, but gives the guides also the certainty that their charges have understood what to do before heading for the real thing.

And that real thing then gets the adrenaline flowing, when the moment comes to zap across the deep ravines and through the foliage of tropical trees or racing across the tree canopy, close enough to almost touch, almost being the key word as the steel cables are strung up to allow for a clear ride. The family members I was with shrieked with joy when zapping from the starting point to the other end of each of the 8 lines, where cameras ready and videos running every incoming was greeted by those who had arrived before them.
Andrew Molyneaux is the companys responsible health and safety manager and he went to great length to explain their installations to this correspondent, and the process of the initial inspection and certification of the zip lines set up, by local authorities assisted with technical experts from abroad. Safety comes first and there cannot be a compromise he said, and a closer look at the installation gave ample reassurance of regular inspections and maintenance, the same incidentally with the harnesses and equipment like helmets and gloves.

Johan Cronje, aka Crunchie Cronje, went along as he does most of the times, assisted by local guide Pascal, who joined SMAC when it started operations at the resort in April 2011. At that time the rock climbing walls were officially launched, reported here at the time as breaking news of course but since then expanded to include a kids wall and an abseiling station, which as witnessed was in regular demand by guests from within the resort but also from outside. And that was actually not surprising as the word by mouth campaign, without a full marketing offensive, seems to have worked and the main DMCs were all reported to adding the activity in their destination material of things to do and places to go, when on the islands. According to information received, the SMAC experience already ranks as the 10th most popular day trip and activity and both Johan and Andrew were certain to make it into the top five very soon, aiming to capture top spot eventually. 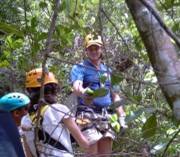 With their keen eye for locations and knowledge of other adventure activities, it seems only a matter of time before they will embark on setting up a bungee jump operation or a paragliding base from one of the tall rocks overlooking Mahes magical beaches, when similar to what I have witnessed in Rio, daring tourists are strapped on to an experienced parachutist before jumping off from a platform, and then, after a smooth ride through the skies, setting down on a beach in precision landings.
The skies over the Seychelles seem the limit for those two and their enthusiasm about everything and anything pumping adrenalin will undoubtedly propel their numbers and popularity upwards and make their dream come true, to make the Seychelles as much a centre for adventure activities as it is until now for being a magical island paradise surrounded by crystal clear waters. Such added attractions will portray the islands in a new and even more exciting light to the world, beyond all the superlatives already attached to their marketing juggernaut. Time now for some more zip zapping across and through the Constance Ephelias tropical forest. And oh yes, SMAC does provide a 3+ minute video clip for participants on request and are planning to install video/web cams on strategic points at the end and starting points of each line, and perhaps even in between, to capture the daring rides for posterity. Here is my clip, uploaded on You Tube for all to watch.