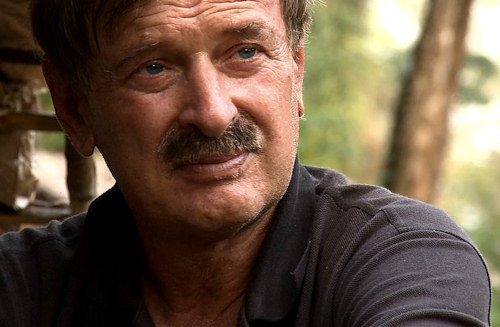 FOLLOWING THE PUBLICATION OF THE REDACTED VERSION OF KARL AMMANN’S ARTICLE DID DOZENS OF MESSAGES COME IN FOR MORE DETAILS.

KARL THANKFULLY CONSENTED AND THE FULL, UNEDITED VERSION OF HIS EXPOSE IS NOW AVAILABLE ON ATCNEWS.ORG

The African Ranger Awards and the demand side of the coin

When researching the illegal wildlife trade, very often some tentacles lead back to South Africa. Not only when it comes to rhino horn, abalone and lion bone but in this case to one of South Africa’s biggest company: Naspers, a major shareholder in Tencent, who in turn owns WeChat, a Chinese multi-purpose messaging, social media and mobile payment app heavily involved in providing an e-commerce platform for trading wildlife products. The chairman, Pony Ma, is also co-chairman of the Paradise Foundation. Another co-chair is Alibaba’s Jack Ma who, via its Taobao e-commerce platform is also a key player when it comes to facilitating the illegal wildlife trade.

One of the flagship projects of the Paradise Foundation is the African Ranger Awards (advertised on their website with an aim “to help stem the current decline in populations of Africa’s wildlife”). It hands out a total of US $150,000 yearly, through fifty US $3,000 African Ranger Awards for “threats and challenges overcome”. 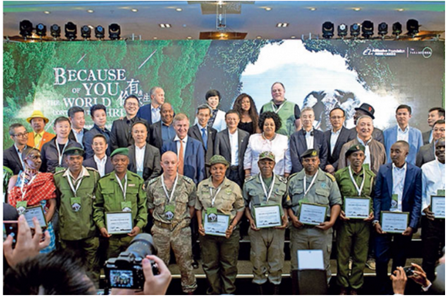 Last year, Jack Ma was in Cape Town to hand out the first lot of these awards to men and women putting their lives on the line to defeat poachers. Pony Ma is listed as the richest man in China with a fortune of US $37.3 billion. Jack Ma is second, with US $35.7 billion. The U$ 150 000 is probably less than the two co-chairs earned that afternoon in Cape Town. It was however a good public relations exercise, with VIPs flying in for the event, but in the context of the above, it is also deeply cynical. 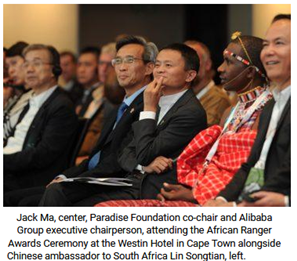 For a few years now evidence has been piling up on a wide range infraction of national and international laws in the context of the wildlife trade on accounts on Alibaba platforms, mostly on Taobao, the world biggest e-commerce set up, founded and owned by Alibaba. Trade of products like ivory, rhino horn, bear bile, horn bill caskets, pangolin scales tiger bone jewelry, etc., is increasing. When these “officially” highly controlled and illegal items are involved, most of the time sourcing takes place using special terms to bypass the very superficial keywords filters put in place to prevent this illegal trade. Often times, after pinpointing a dealer, the seller demands that the negotiations move to WeChat, the flagship of Tencent Holding; voice messages are used for smoother and less traceable transactions.

This trade is nowadays many times greater than what is offered over the counter in shops. It also includes Chinese traders based in neighboring countries who market their merchandize this way; there over 40 just in Laos. 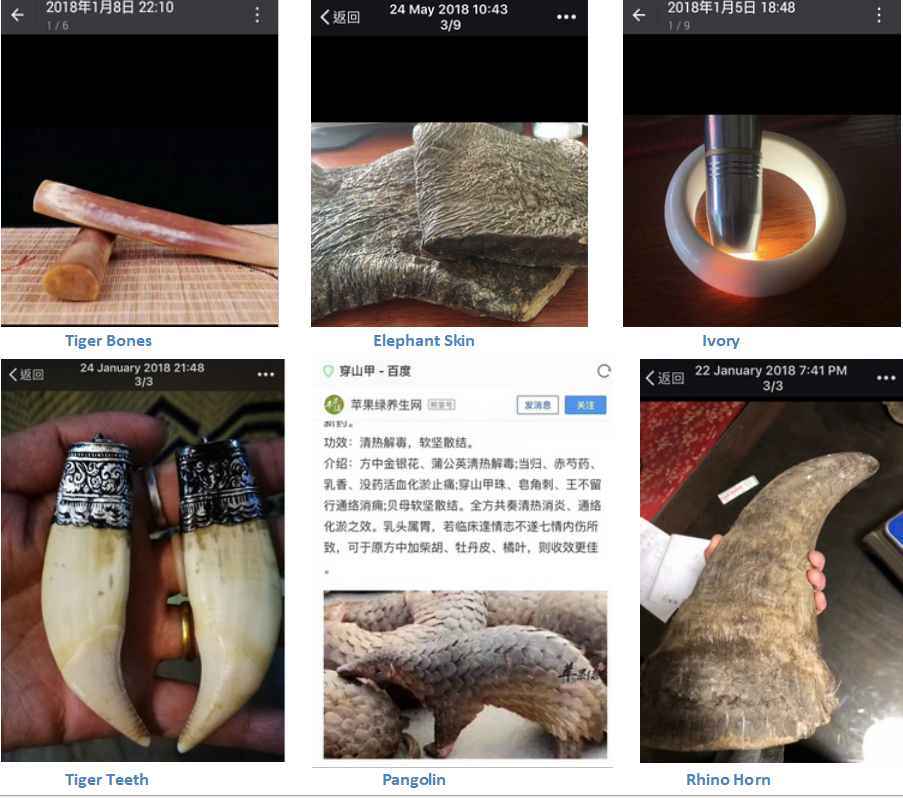 For more items, follow this link: https://www.dropbox.com/sh/in6xmjq0gdi8tqp/AAAOm7g194waLSlc7mo-zyN0a?dl=0
An illustration below how to source rhino horn and tiger products on TaoBao/WeChat:

I ordered some tiger bone items for DNA analysis, to find out what is real or how much of the jewelry marketed as tiger bone is actually lion bone. The items were delivered without any problems to my hotel reception, and in most cases the most prominent Chinese courier did the drops.

Given what I was finding, it seemed appropriate to question the Paradise Foundation African Ranger Awards. I emailed some of the judges of the awards committee, suggesting it was absurd that the parties which facilitated the trade were feting African rangers risking their lives to prevent it.

My email was expanded into a blog by a conservationist, and was read by someone traveling with a co-founder of Alibaba, who then passed it to Jack Ma. This resulted in channels being opened up to the Alibaba headquarters.

Via conference calls and e-mail exchanges, including the above DropBox link, I presented them with a range of evidence. It appeared their knowledge was extremely limited and it was clear they were not trying very hard to curb these transactions. They indicated that they had met with western NGOs based in China concerning this. However, given that foreign NGOs must now register and be under the direct supervision of a Chinese ministry, these organizations have become very reluctant to raise issues of infringing on national and international laws. So that wasn’t a route that would produce solutions. 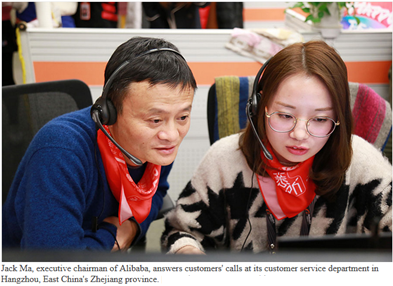 But there is a precedent for positive action. In 2015 the Kering Group, a global luxury group that manages the development of a series of renowned Maisons (Gucci, Saint Laurent and Boucheron to name just a few), filed a multi-millions dollars lawsuit against Alibaba in a New York court, for copyright infringement for manufacturing and selling counterfeit Gucci bags and other luxury products. An out-of-court settlement was reached and the two companies created a “joint task force” and a special division to deal with intellectual property rights issues on Alibaba’s trading platforms.

In 2018 the China Daily reported that this enforcement department accounted for 5,453 suspected cases and out of these identified 63 confirmed criminal cases, which resulted in the arrest of 129 people, of which 104 received suspended sentences!!!

It is very rare for corporate executives in China to question government policy and law enforcement. One exception is the case of one manufacturer who had been caught twice and was still out on bail. This resulted in the chief of Alibaba’s intellectual property right protection center, Ye Zhiefel, to comment “that this showed the lenient punishment, including detention, could not threaten them”. Thus questioning the political will relating to enforcement.

In the context of sites offering illegal wildlife products on Taobao platforms, there are no indications of prosecutions and arrests. In my exchanges with Alibaba, I was told that they regularly take down such sites, but no indication of any further legal action. When I asked for the relevant data, the answer was that “due to the corporate secrecy policies, we are unable to provide statistics around the volume of wildlife-related products.”

I asked if, as part of a documentary film, we could film their staff taking down accounts as well as doing some interviews; there was no response. There was also no response to my suggestion that, instead of my researchers handing over their data (as they requested) and having to worry about repercussions, Alibaba recruit them as independent third party auditors to provide the relevant evidence they would be able to collect.

I also provided Alibaba with updates about the trade in mammoth ivory, which is legal in China and is a way to launder elephant ivory. And the discussing of mammoth ivory items often being the entry point to get dealers to offer a wide range of illegal products. The last two such updates to the Alibaba headquarters have not been acknowledged.

So the grisly online business of selling animal parts continues. The researchers who have compiled some of the above data also came across traders that maintain up to 10 different accounts or sites on Taobao. If one account is suspended, they move to the next one without any further repercussions. It is a high-reward and low-risk business.

I am concerned we have now reached a point where, without a hard hitting Kering-type of approach, Alibaba and Tencent will continue to be party to China’s funnel effect of sucking up the planet’s biodiversity. Could a solution be to classify animals like rhinos, pangolins, elephants, lions and tigers, currently considered common good, as “world heritage species”, belonging to mankind and not to those who capture and trade them? Environmental lawyers should ride to the challenge, looking for Kering-type legal challenges.

Meanwhile, in six months we will again witness the African Ranger Awards ceremony where prominent western conservationists and VIPs fly in to celebrate and drink in a five-star hotel. The underlying message will again be that the problem rests with Africa, and that with better rangers doing better jobs, there will not be a problem.

This is absurd. The risks these rangers take are precisely because of the huge demand in the East, nowadays driven largely by Alibaba and Tencent. It’s time to call a spade a spade.